Passenger who was on the flight with Donald Trump confirms that his accuser is lying. “He was present at all times” and affirms that no assault ever took place

A British passenger who was on the flight where Jessica Leeds claims Donald Trump sexually assaulted her has come forward and is refuting that any such thing took place.

Anthony Gilberthorpe, pictured above, was sitting across the aisle from Donald Trump and Jessica Leeds on the flight in question and confirms that no assault or groping took place, as he was present at all times on the flight.

In fact, Gilberthorpe affirms that Leeds was very flirtatious with the billionaire, confessing at one point to Gilberthorpe that “she wanted to marry him.”

While Gilberthorpe has no more concrete evidence that an assault never took place than Leeds has that one did, it is a fact that Leeds has a longtime association with the Clinton Foundation and is a Hitlery supporter. So, it is a matter of who you are going to believe.

I believe Trump. Not because of Gilberthorpe’s affirmation (by the way there is much more evidence that has come out to prove that Leeds is a barefaced liar), but because one look at Leeds, pictured below, confirms that she is not the kind of woman Donald Trump is attracted to. Trump has a lifelong history of being attracted to beautiful women, and Leeds is anything but that. She is A dog, a two-bagger, one bag for her and one for her partner, in case her bag falls off. THAT is all the evidence I need to conclude that Leeds is a garden variety scumbag and liar! 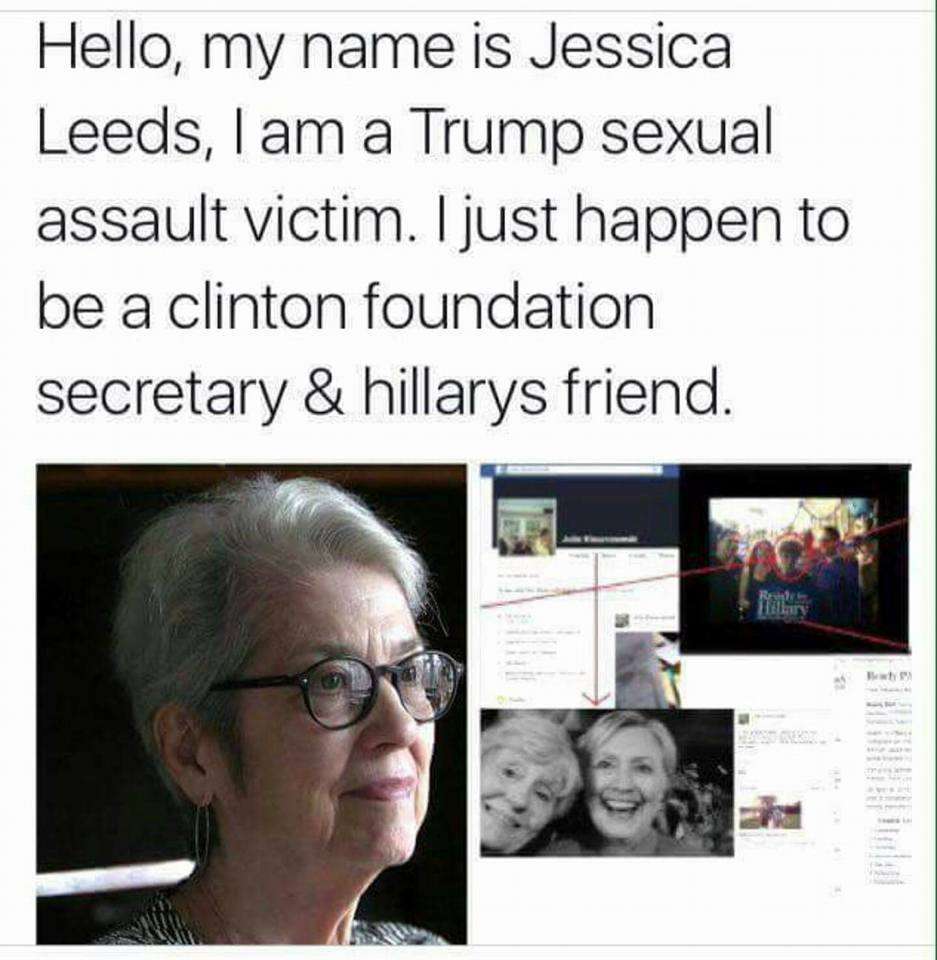 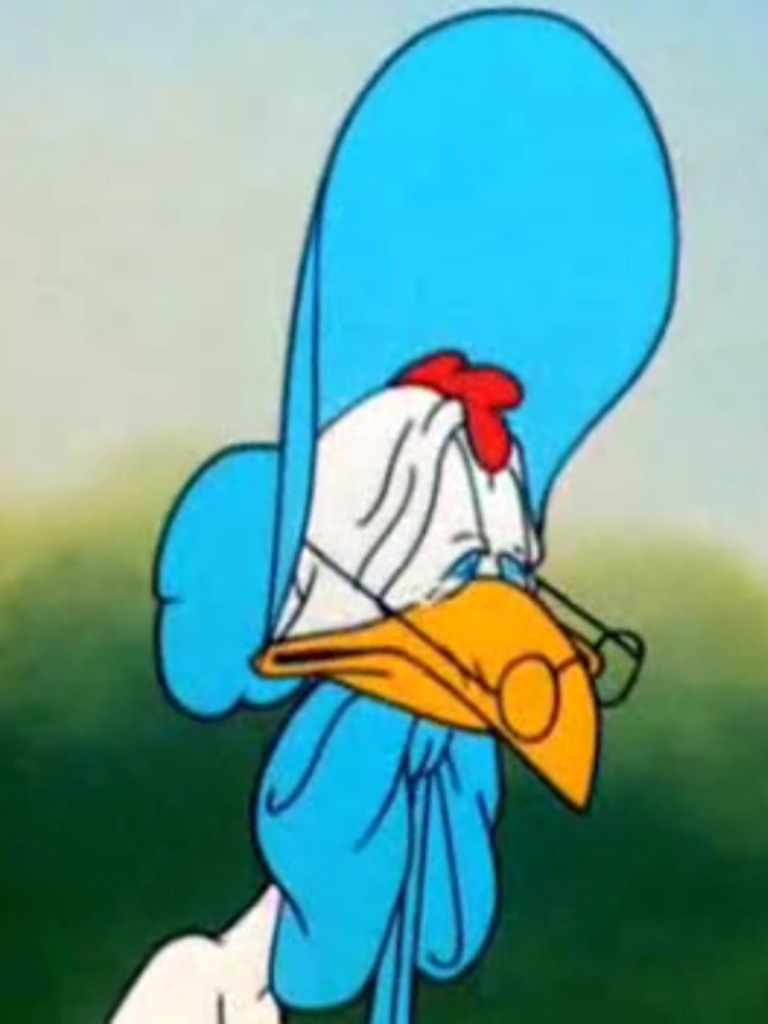 Anyone else seeing Foghorn Leghorn’s girlfriend?

Donald Trump’s campaign says a British man is countering claims that the GOP presidential nominee groped a woman on a cross-country flight more than three decades ago.

The man says he was sitting across from the accuser and contacted the Trump campaign because he was incensed by her account — which is at odds with what he witnessed.

“I have only met this accuser once and frankly cannot imagine why she is seeking to make out that Trump made sexual advances on her. Not only did he not do so (and I was present at all times) but it was she that was the one being flirtatious,” Anthony Gilberthorpe said in a note provided to The Post by the Trump campaign.

In an exclusive interview arranged by the campaign, Gilberthorpe said he was on the flight — in either 1980 or 1981— where Jessica Leeds claimed Trump groped her.

Gilberthorpe, 54, said he was sitting across the first class aisle from the couple and saw nothing inappropriate. Leeds was wearing a white pantsuit, he said, while Trump was wearing a suit and cuff-links, which he gave to his British flight companion.

Indeed, Gilberthorpe claimed, Leeds was “trying too hard” in her attempt to win Trump over.

“She wanted to marry him,” Gilberthorpe said of Leeds, who apparently made the confession when Trump excused himself and went to the bathroom.

There was no kissing, but the “shrill” Leeds was “very much in your face” with the real estate developer.

Gilberthorpe made headlines in 2014, when he went public with a claim that as a 17-year-old he procured boys (some who “could have been” underage”) for sex parties with high-ranking British politicians.

‘If there’s evidence Trump’s done it, sure, hang him from the post, but I was there, I was in a position to know that what she said was wrong, wrong, wrong.’

Gilberthorpe has no evidence to back up his claim — just his self-described excellent memory.

“What she said about Trump is wrong,” he told The Post. “I mean, no decent human being could sit by and have a woman go on television and tell the United States of America — accuse an individual of sexually molesting. It’s wrong for Trump, it’s wrong for me. But you know something else? It’s wrong for the American people,” he said.

Leeds alleged this week in interviews with The New York Times and CNN that Trump groped her, touching her “wherever he could find a landing spot.”

“The guy in the seat across the aisle could see. And I kept thinking, maybe the stewardess is going to come and he’ll stop, but she never came,” Leeds told CNN.

That allegation infuriated Gilberthorpe, a retiree living in northwest England, who said, “That I sat there — eyes bulging —  and not intervening is nonsense.”

“If there’s evidence Trump’s done it, sure, hang him from the post, but I was there, I was in a position to know that what she said was wrong, wrong, wrong,” he said.

He immediately recognized Leeds when he saw video of her in The Times earlier this week holding up a younger picture of herself.

“Undoubtedly it was her,” he said. “I have a good photographic memory. I recognized her.”

He said he contacted the Trump campaign because he didn’t like that Leeds said that another passenger sat by while she was molested.

At a rally Friday in North Carolina, Trump claimed all allegations against him are “100 percent totally and completely fabricated.”

Speaking of Leeds, Trump said, “When you looked at the horrible woman last night, you said ‘I don’t think so.’”

Gilberthorpe is even challenging Leeds to a public confrontation.

“I will go to head to head with her — I will meet her again. I will see her eyes across the table with my eyes and I will challenge her on the points she made. And I’ll tell you what, I would do this whether it was for Trump, for Clinton, for Obama, or for any man who’s been accused of sexually molesting someone when I know he did not,” he said.