ISIS OR ISIL? THERE IS A BIG DIFFERENCE!

I posted this peculiarity a few months ago. It has become increasingly conspicuous, annoying even, that while the rest of the world refers to the cockroaches beheading innocent people, including children, across Syria and Iraq, as ISIS, or IS, King Barrack Hussein, and the rest of his administration insist on referring to the lice-ridden scumbags as ISIL.

“Tomaytoes/tomahtoes? I don’t think so. If you look closely at the literal, geographical difference between the two acronyms, it appears that there is much more to the story.

Ostensibly, anyone referring to this nest of rats as ISIL, and only as ISIL, while the rest of the civilized world refers to them as ISIS, is denying the existence of Israel, a point much harder to support had not that talking point made its way to every official mouthpiece of every agency and department within the federal government. 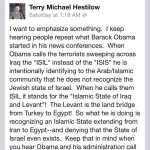