ISIS celebrates taking of Ramadi with huge military parade, a perfect strafing target. The US-led coalition does NOTHING!

Mutilated bodies scatter the streets of the ‘Gateway of Baghdad’, where Islamic State slaughtered around 500 and forced nearly 25,000 to flee their homes over the last few days.

Now ISIS has released images of militants celebrating, children wielding automatic weapons and a fleet of pick-up trucks carrying its jubilant fighters through the blood-stained streets of Ramadi.

Shi’ite fighters have already launched a counter-offensive to recapture the city, but these kinds of tactics play straight into Islamic State’s grand plan to spark all-out war in the region, according to the Middle East director of counter-terrorism think-tank RUSI.

Islamic State militants are already marching east towards the Habbaniya army base – around 20 miles east of Ramadi – where a column of 3,000 Shi’ite paramilitaries are amassing, witnesses and a military officer has said.

And if ISIS manage to reach Baghdad, it would be ‘utter carnage’, Professor Gareth Stansfield told MailOnline. 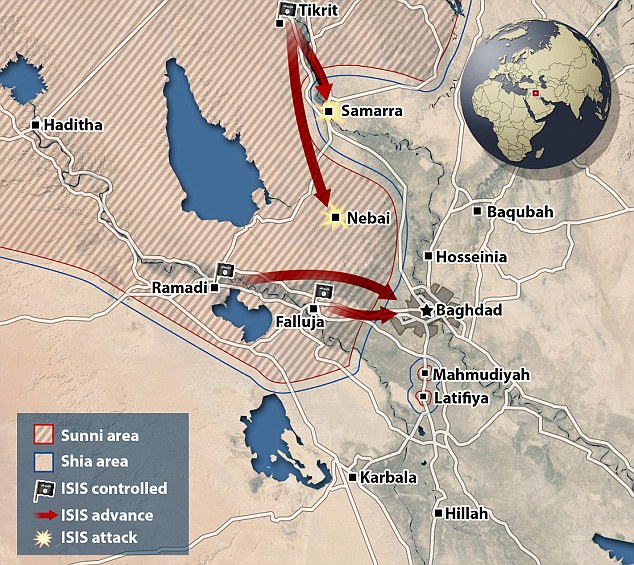 Surrounded: ISIS already has control of Fallujah which is on Baghdad’s doorstep and has now conquered the strategically important city of Ramadi further west. It has Sunni support to the south of the Iraqi capital and is waging battles with security forces in the north to effectively ‘surround’ Baghdad 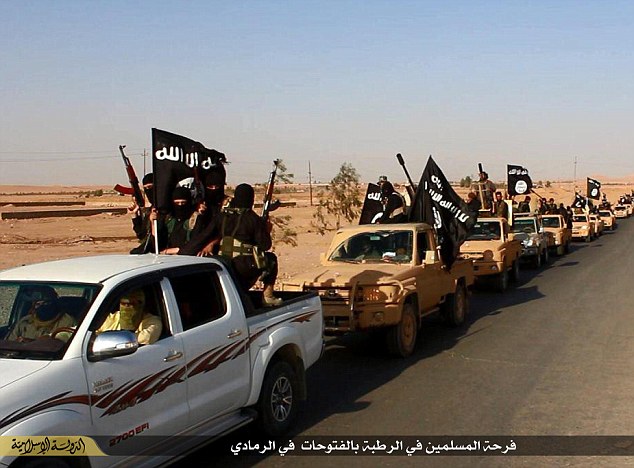 Parade: After slaughtering 500 people and forcing over 8,000 from their homes, ISIS triumphantly drive through Ramadi (pictured) in a fleet of pick-up trucks 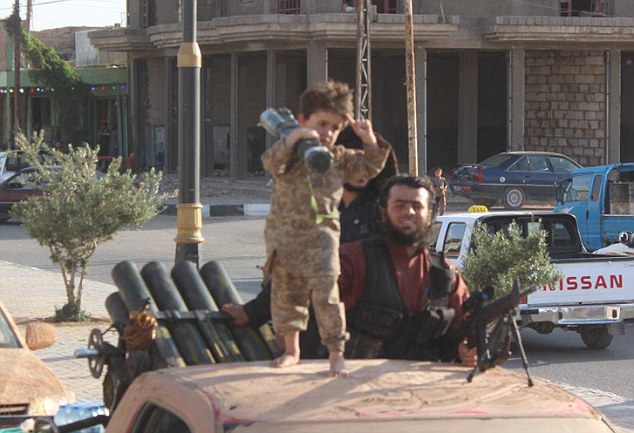 Sick: One twisted image released through Islamic State’s social media channels shows a small child carrying what appears to be a mortar shell in Ramadi –  after their victory in the city
take our poll - story continues below
Completing this poll grants you access to Powdered Wig Society updates free of charge. You may opt out at anytime. You also agree to this site's Privacy Policy and Terms of Use. 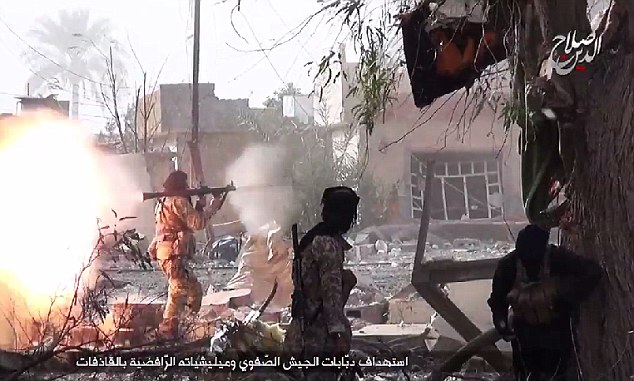 Insurgency: The city where ISIS militants fired rocket propelled grenades contains sacred Shi’ite shrines which – if destroyed – would force the militia to take on ISIS head on, experts have said 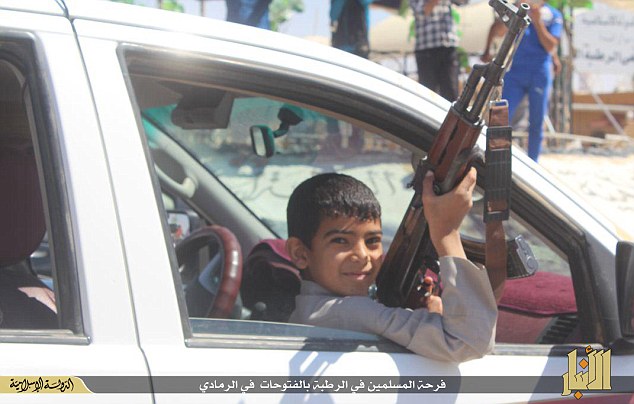 Innocence lost: ISIS has released pictures showing its militants – and young followers (pictured) – celebrating the capture of Ramadi as Shi’ite militias prepare a counter-offensive to retake the city
He said: ‘If ISIS turn up in great numbers in Baghdad, it will be an absolute slaughter between Sunni’s and Shia’s there.

‘They [ISIS] are now having so many successes, and moving so quickly, that Baghdad is under very real threat from ISIS forces outside Baghdad and also the ISIS terror cells inside Baghdad as well.

‘We’re in for a very long summer of fighting in Iraq and ISIS could make their move [on Baghdad] in the next month. Taking Ramadi will… make the Shia militia in Baghdad even more radicalised and more dangerous.

‘And this is what ISIS wants, it wants it to come out and have sectarian scrap which forces all the Sunni’s to go towards ISIS. 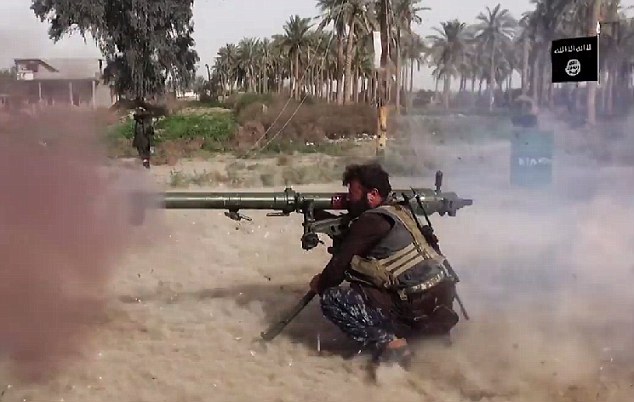 Pincer attack: As reports flood in that ISIS has taken over Ramadi, its militants have also been battling security forces in Samarra (pictured), around 70 miles north of Baghdad 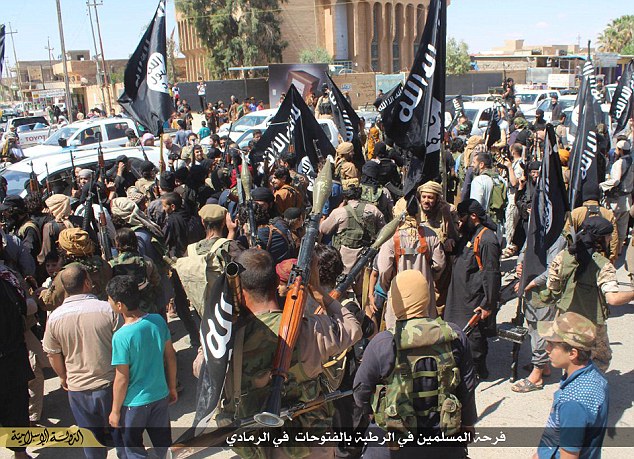 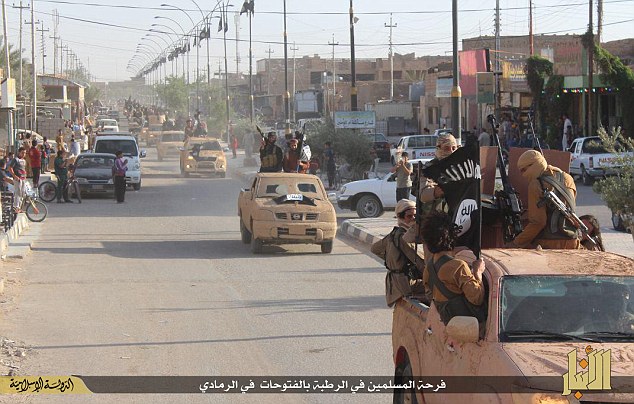 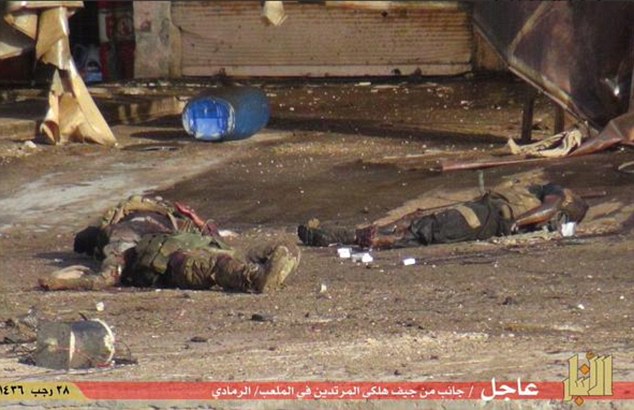 Cut down in cold blood: Pictures posted on Twitter show bodies of Iraqi soldiers lying strewn across a street in Ramadi after ISIS militants carried out mass killings during their capture of the strategic city 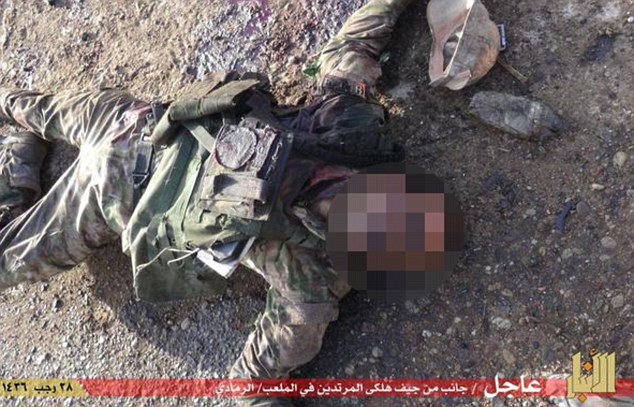 ‘If they had any opportunity to enter Baghdad, they would do. But it will be more and more difficult for them to do it because Baghdad is a military stronghold of the Shia militia.’

And if they manage to actually take Baghdad, which is predominantly Shia but has some Christian regions, Professor Stansfield says ‘there would be massacres to the scale we haven’t seen since the Mongol empire in the 13th Century’.

The UN said tonight that close to 25,000 people have fled Ramadi after militants attacked the city.

United States-led airstrikes have stepped up raids against the Islamists, conducting 19 strikes near Ramadi over the past 72 hours at the request of the Iraqi security forces, a coalition spokesman said.

And as fighting rages in and around the city, Islamic State fighters are also taking on Iraq’s military and tribal groups in the north. 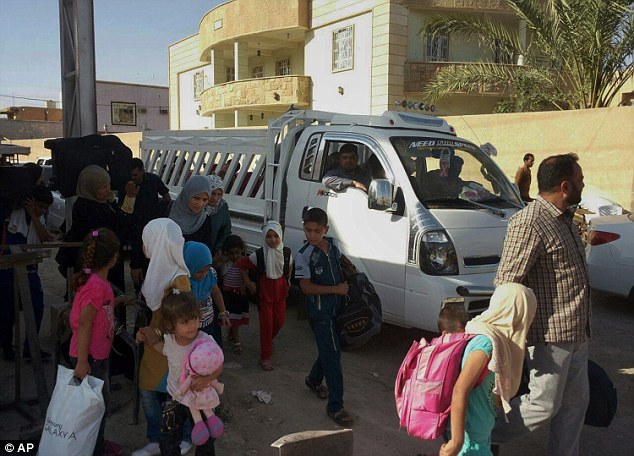 Fleeing: Civilians ran from their homes in Ramadi after Islamic State militants started searching door-to-door for policemen and pro-government fighters 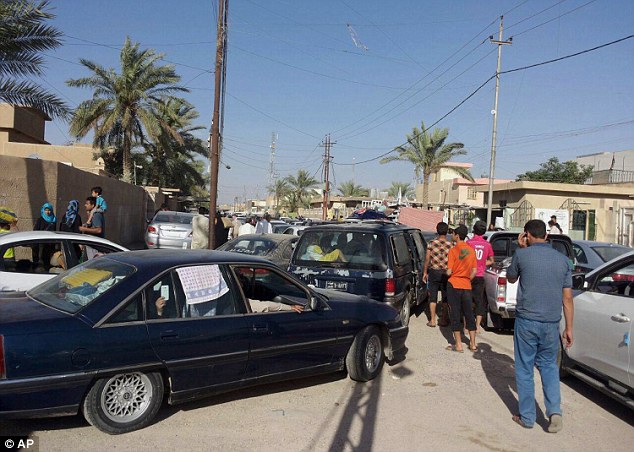 Terror: The streets of Ramadi descended into gridlock as civilians started fleeing from their homes today 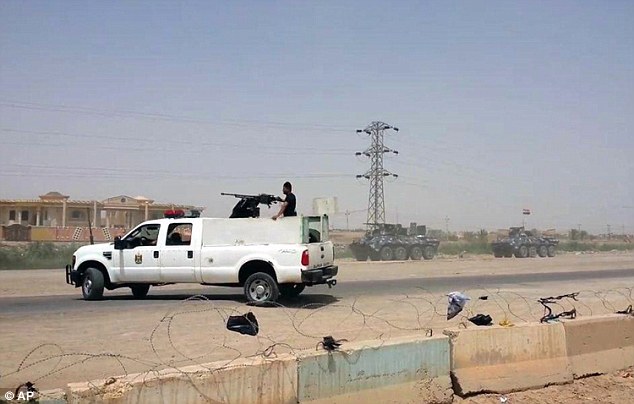 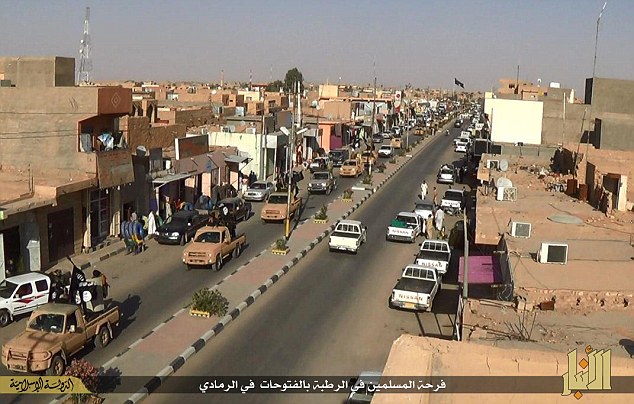 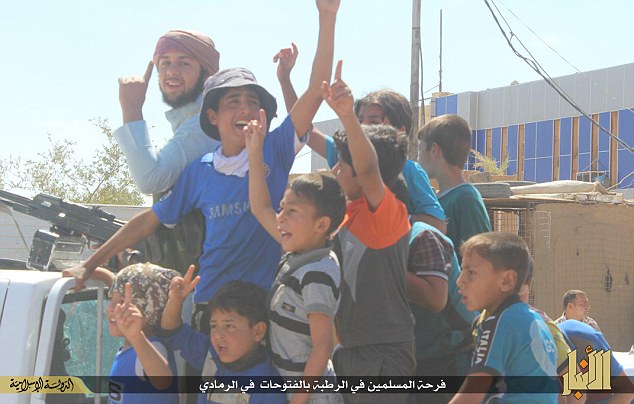 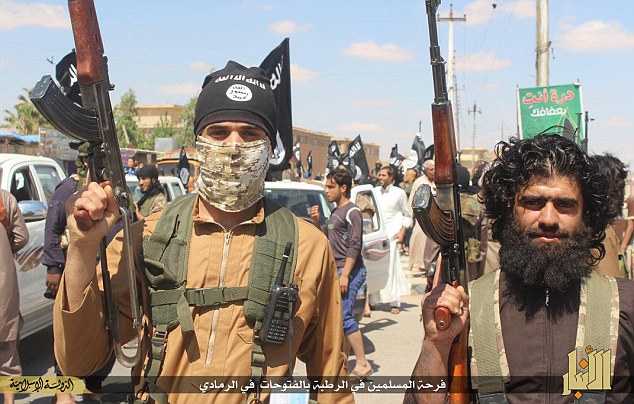 Villains: If ISIS (pictured) take Baghdad, ‘there would be massacres to the scale we haven’t seen since the Mongol empire in the 13th Century.’ an expert claimed

ISIS are using rocket-propelled grenades to take on the Shi’ite militia ‘Popular Mobilisation’ in the city of Samarra, 70 miles north of the capital, according to Institute for the Study of War.

Equally brutal battles are taking place in Nebai just 50 miles to the north-west of Iraq, where ISIS has reportedly used ‘various weapons’ against Iraqi security forces and tribal fighters.

Professor Stansfield added: ‘Baghdad is in some ways already surrounded but now it’s lost Ramadi, this now brings the spectre of ISIS extremely close to Baghdad.’

‘If you piece together where ISIS has control, it has Baiji which is much further north but still somewhere the Iraqi forces are having to fight. 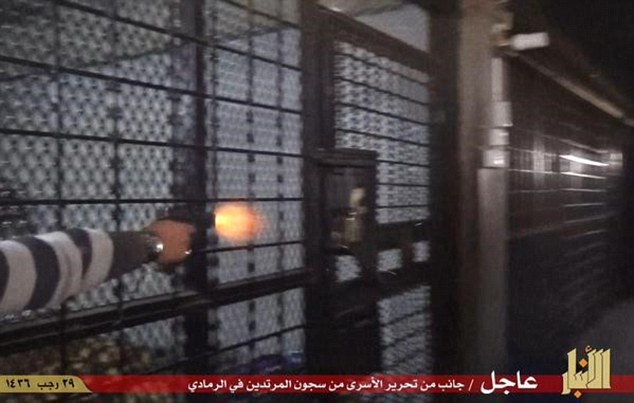 Pictures released by Isis purportedly show the terror group releasing prisoners from Ramadi having stormed into the city. A gun was fired at locks securing cells in the city’s jail 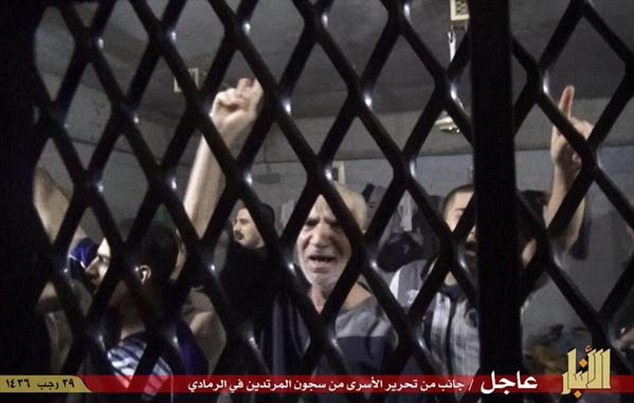 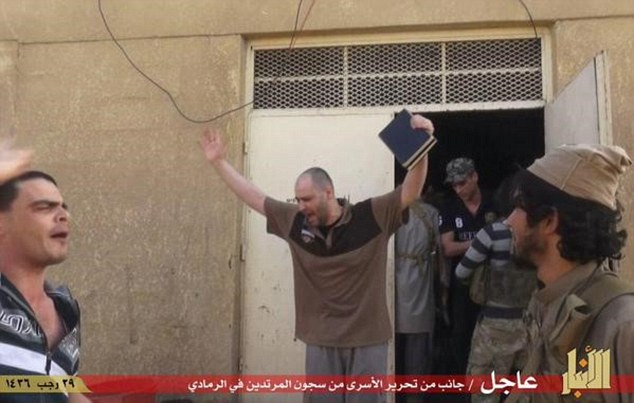 According to Iraqi security forces, most of the high-valued prisoners had already been moved from the jail to other detention centres

The loss of Ramadi – the capital of Iraq’s largest province Anbar – was the military’s worst setback since it started clawing back territory from the Islamic State group late last year.

Chilling images showing the totality of their defeat there show ISIS militants celebrating openly in the streets among dozens of charred bodies.

One man appears to have been captured by the merciless militants, who filmed the man’s terrified expression before brutally beheading him on camera.

Other videos showed Humvees, trucks and other equipment speeding out of Ramadi, with soldiers gripping onto their sides in a desperate and chaotic retreat.

Regarding how many people have died there in total, a spokesman for the Anbar province’s governor said: ‘We do not have an accurate count yet.’ 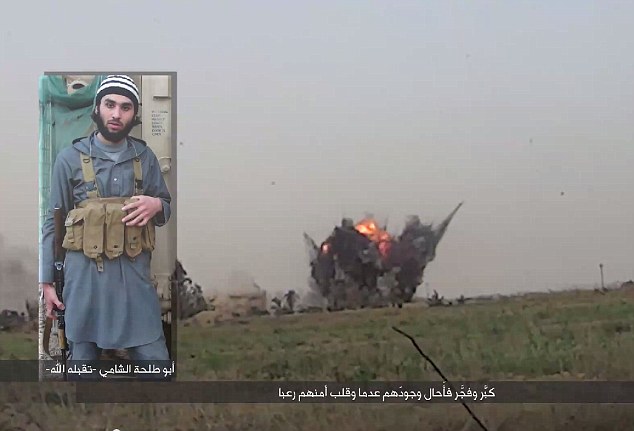 Twisted: The picture of a man who supposedly carried out this suicide bombing in Ramadi featured in one of the many propaganda videos released by ISIS, in the wake of their victory in the city 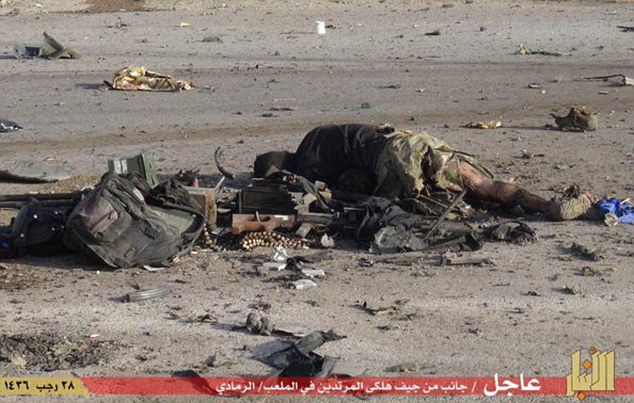 Butchered: Around 500 people are understood to have been killed over the past few days as the capital of Iraq’s Anbar province fell to the terror group 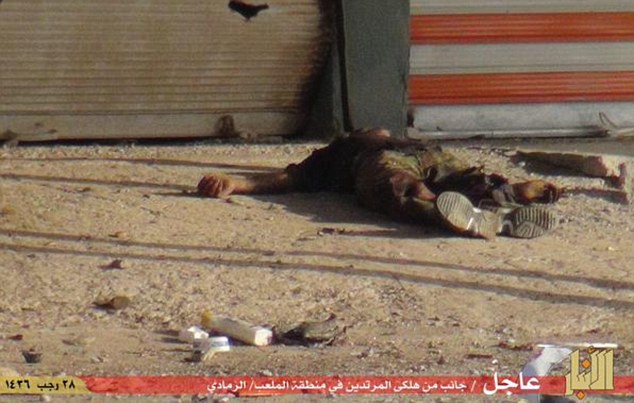 Death: Their bodies, some charred, were strewn across roads while others had been thrown in the Euphrates River

Edging closer: The loss of the capital of Iraq’s largest province (shown on map) marks one of Baghdad’s worst setbacks since it began a nationwide offensive last year to reclaim territory lost to ISIS 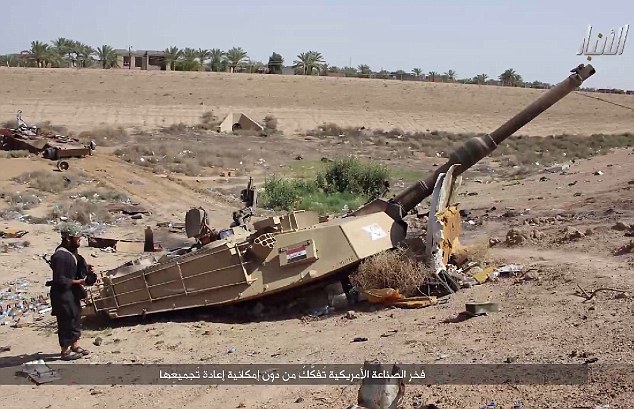 Wrecked: A triumphant ISIS militants poses next to a destroyed tank – which bares the flag of Iraqi’s military

Muhannad Haimour added: ‘We estimate that 500 people have been killed, both civilians and military, and approximately 8,000 have fled the city.’

The estimates are for the past three days, since Friday, when the battle for the city reached its final stages.

The 8,000 figure is in addition to the enormous exodus in April, Haimour said, when the U.N. said as many as 114,000 residents fled from Ramadi and surrounding villages at the height of the violence.

Local officials have said that ISIS carried out mass killings of Iraqi security forces and civilians.

With defeat looming, Prime Minister Haider al-Abadi had ordered security forces not to abandon their posts across Anbar province, apparently fearing the extremists could capture the entire desert region that saw intense fighting after the 2003 U.S.-led invasion to topple dictator Saddam Hussein.

By late Sunday, a large number of Shi’ite militiamen had arrived at a military base near Ramadi, apparently to participate in a possible counter-offensive, said the head of the Anbar provincial council, Sabah Karhout. 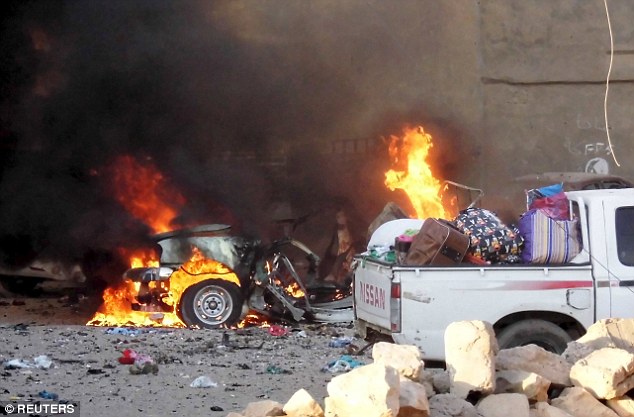 Carnage: ISIS have taken full control of the Iraqi city of Ramadi after security forces fled the area following a series of suicide car bombings. Pictured: A car is engulfed in flames during clashes in the city 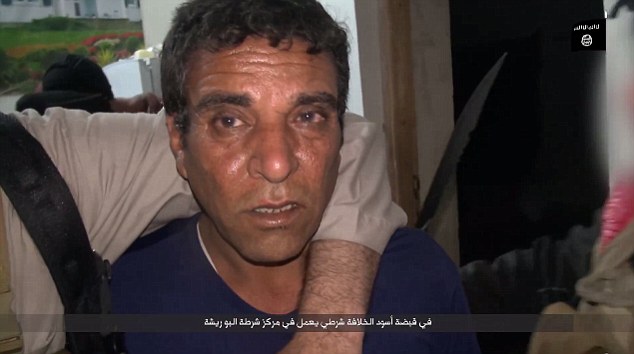 Horror: An Iraqi man captured by ISIS during their siege on Ramadi looks terrified in one of their propaganda videos – in which he is later seen decapitated 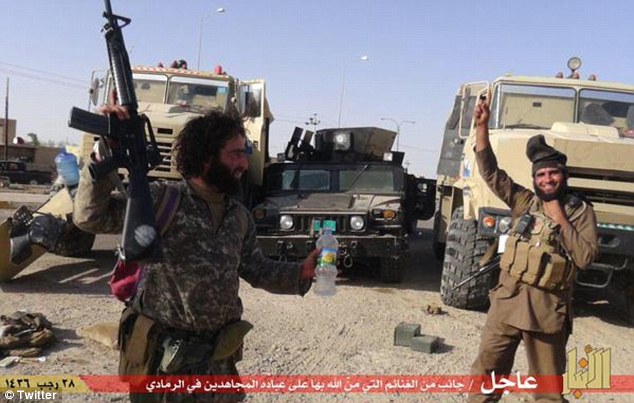 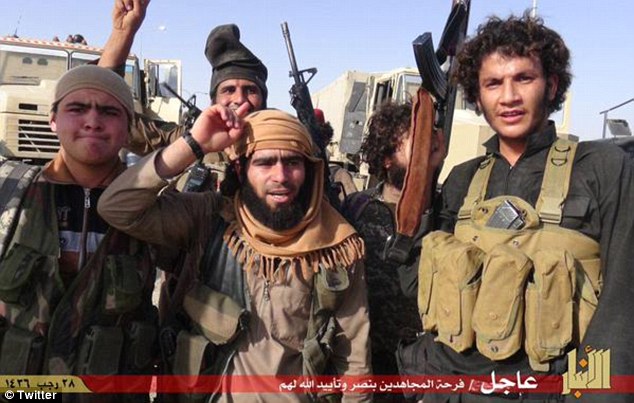 Jubilant jihadis: On a militant website frequented by ISIS members, a message from the group claimed its fighters held the 8th Brigade army base as well as tanks and missile launchers left behind by fleeing soldiers 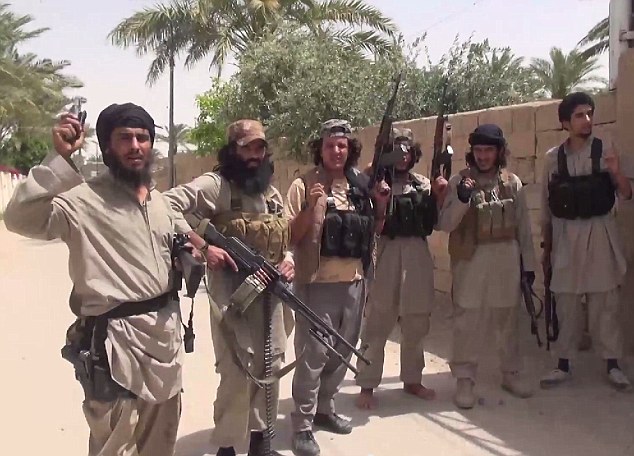 U.S. Secretary of State John Kerry said he remained confident about the fight against the Islamic State group, despite the setbacks like the loss of Ramadi.

Kerry, travelling through South Korea, said that he’s long said the fight against the militant group would be a long one and that it would be tough in the Anbar province of western Iraq where Iraqi security forces are not built up.

Sunday’s retreat recalled the collapse of Iraqi security forces last summer in the face of the Islamic State’s blitz into Iraq that saw it capture a third of the country, where it has declared a caliphate, or Islamic State.

It also calls into question the Obama administration’s hopes of relying solely on airstrikes to support the Iraqi forces in expelling the extremists.

‘We welcome any group, including Shi’ite militias, to come and help us in liberating the city from the militants.

‘What happened today is a big loss caused by lack of good planning by the military,’ said Sunni tribal leader Naeem al-Gauoud.

Liberal Local And State Officials Use Coronavirus Funds For Free College, Guaranteed Income
September 22nd, 2020 The Political Cowboy
Send this to a friend