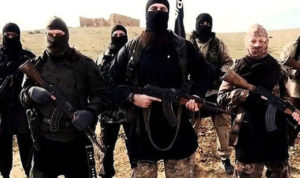 The German people have Angela Merkel to thank for this!

German intelligence has confirmed that ISIS death squads are intermixed amongst the so-called refugees that are flooding Germany’s borders, as well as borders across Europe.

‘We have to accept that we have hit squads and sleeper cells in Germany,’ asserted Hauser, adding, ‘We have substantial reports that among the refugees there are hit squads. There are hundreds of these reports, some from refugees themselves. We are still following up on these, and we haven’t investigated all of them fully.’

The message here is clear. Germany will experience more Islamic terrorist attacks in the imminent future. While German intelligence services are among the best in the world, it’s impossible to stop every terror plot, especially considering the fact that so many ISIS operatives may have sneaked into the country posing as asylum-seeking migrants. Embedded into large groups of refugees at Europe’s processing centers, ISIS terrorists have been impossible to detect, let alone separate, from the general population of migrants.

According to the deputy head of Bavaria’s spy agency, German intelligence now has ‘irrefutable evidence that there is an IS command structure in place, making a successfully orchestrated large-scale attack ‘likely.’ Berlin may be the next Paris or Brussels. The would-be suicide bomber or bombers may come from a refugee resettlement area. Hauser’s own region has allowed in countless refugees, many of which may have been ISIS terrorists.

‘We have substantial reports that among the refugees there are hit squads.’

‘Bavaria has been the main gateway for asylum seekers fleeing conflict in the Middle East, over 1 million of whom arrived in Germany in 2015,’ reports Politico Europe.”

Biden Refers to GOP Governors As Neanderthals for Ending Mask Mandate In Their States
March 3rd, 2021 Flag And Cross

Texas Justice Of The Peace And Three Others Arrested, Charged With 125+ Counts Of Voter Fraud
March 3rd, 2021 The Lid
Contact us