VIDEO: ISIS taking down a Russian jetliner over Egypt, killing all 244 souls on board. How long do we allow these cockroaches to operate?

Photo, above: ‘The burning plane’: ISIS yesterday released a video purporting to show the moment the burning Airbus A321 plummeted through the sky before hitting the ground. The horrific footage – which was posted online and cannot be verified by MailOnline – shows a large structure resembling a plane falling through the air before being consumed by a mass of smoke  and eventually splitting in two

ISIS has released a video purporting to show the final moments of the Russian jet that crashed in Egypt, killing all 224 people on board.

The terror group has claimed it downed the aircraft, but has not said how it might have done so. The horrific footage – which was posted online and cannot be verified by MailOnline – shows a large structure resembling a plane falling through the air, before being consumed by a mass of smoke.

Cairo and Moscow have denied any possible terrorism link in the incident, which was one of the deadliest Airbus crashes in the past decade.

However, it has emerged that the aircraft broke up mid-air scattering debris and bodies over a wide area. This morning, Egyptian authorities recovered the body of a three-year-old girl some five miles from the crash scene.

So far, only 163 bodies of the 224 people on board have been recovered. As a result, authorities are expanding the search perimeter to nine miles.

An Egyptian security official said: ‘We found a three-year-old girl eight kilometres from the scene.’ He said many of the bodies are missing limbs.

It comes as it has emerged that the burning Airbus A321 did not lodge an SOS call before it plummeted to he ground in the restive Sinai Peninsula.

Professor Michael Clarke, Director General of the Royal United Services Institute said early indications suggest that the jet may have been destroyed by a bomb on the aircraft.

He told BBC Radio Five Live: ‘This aircraft was 200km north of its take-off zone, that means it was flying at around 31,000 feet. Terrorists, as far as we know, don’t have equipment to take down an aircraft at that height.

‘They have shoulder-launched missiles, known as man-portable missiles. They can get aircraft when they are taking off or landing, when they are going low and slow. But anything above 8,000 or 9,000 feet is out of the range of the weapons that they’ve got.’

He said the area where the jet crashed is a known location for groups affiliated to Al Qaeda and ISIS, but it was highly unlikely that a ground-based weapon was responsible for the in-flight break up.

‘Early reports said it split into two and that suggests a catastrophic failure, not a mechanical failure, but perhaps an explosion on board, so I would be much more inclined to think, if we have to guess at this stage, it is much more likely to have been a bomb on board than a missile fired from the ground.

‘And there’s no sign of a distress call, so the idea that the aircraft was undergoing an mechanical problem, or an engine problem, or a fire, or something like that, you would expect that there would be some sort of distress call beforehand.

‘So the fact that there was a catastrophic failure at 31,000 feet, with the aircraft falling in two pieces, suggests to me an explosion on board. So was this caused by some form of terrible accident, which is unlikely, or a bomb, which is much more likely, my mind is moving in that direction rather than anything that happened on the ground.’ 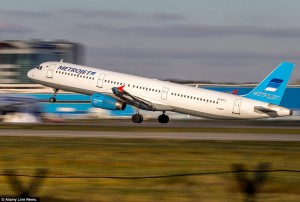 The doomed Airbus A321, pictured earlier this month in Moscow was reported missing soon after it took off from Sharm el-Sheikh in Egypt, officials claimed the pilot warned of a technical problem before the disaster and asked to land at the nearest available airport 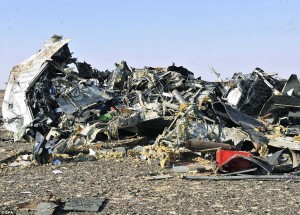 Horrific: This is one of the first images of the mangled wreckage of the Russian passenger jet that crashed yesterday, killing 224 people 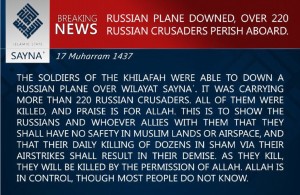 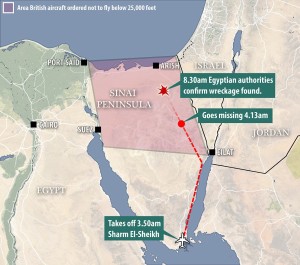 The aircraft was flying through the danger zone in the Sinai peninsula at 31,000 feet when lost radio contact and crashed 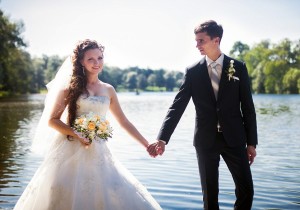 Married: Mr and Mrs Gromov are pictured on their wedding day. They were among the 224 people were perished in yesterday’s disaster 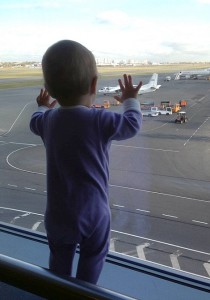 Heart-breaking: This 10-month-old baby, gazing out of an airport window ahead of the disaster, was among those killed