New depths of primeval horror. ISIS regresses deeper into the Dark Ages, beheading a man they accuse of being a witch

Photo, above: Horror: The man was led to the execution site by militants, including one who appears to be a teenager

Militants fighting for the Islamic State in Syria have publicly beheaded a man for allegedly practicing witchcraft – the latest in a long line of barbaric executions carried out by the terror group.

The unknown man was photographed being killed by a masked executioner in a village just outside ISIS’ stronghold and de facto capital Raqqa while a large crowd looked on.

Precise details of the victim’s so-called crime are not known, but the charge of witchcraft and ‘invoking magic’, and the use of an axe and wooden chopping block to carry out the beheading do little to counter claims that ISIS are little more than murderers with a Dark Age view of the world. 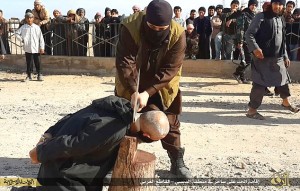 Brutal: The unknown man was photographed being killed by a masked executioner in a village just outside ISIS’ stronghold and de facto capital Raqqa while a large crowd looked on

The beheading of the man, who has a long grey beard, bald head and appears to be in his 60s, took place in a rural area named Aldbsa, to the west the city of Raqqa.

Photographs of the execution and the crowds who watched it were released by ISIS-affiliated media, and were reported by Raqqa is Being Slaughtered Silently – an anti-ISIS activist group based in the city who document the terror group’s barbarism in its de facto capital.

One image shows the elderly man being led to the execution site by militants, including one who appears to be a young teenager. Around the group are masked militants wielding assault rifles.

Another image shows a bearded cleric reading out the charges against the man, before a third photograph shows him kneeling on the floor with his arms bound behind his back, his head resting on the chopping block and the axe just millimetres from his neck. 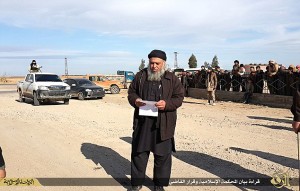 Crime: A bearded cleric reads out the charges against the man before his execution for supposed witchcraft 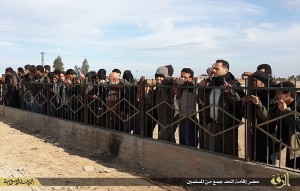 Crowds: Dozens of onlookers press up against metal railings to get a closer look at the gruesome scene