VIDEO: A New York TV station is reporting that Hillary Clinton is dead!

UPDATE – 9/13/2016, 11AM CDT: We continue to search for reports corroborating this story. A story of this magnitude not having corroborating reports tends to lead us to the conclusion that the story is a hoax.

I called WABC7 News and was told that they could not comment on the story, which raises even more suspicion.

Snopes is reporting the story a hoax, but they are citing no evidence. It is apparently just their opinion of the credibility of the source of the story, SuperStation95. I am reluctant to even mention that as I consider Snopes to be in the same credibility league as Hitlery herself, but I am publishing all the information I can find on the obviously very important story.

UPDATE – 9/13/2016, 8:32 AM CDT: Anderson Cooper of CNN spoke to Hillary Clinton by phone at 8PM EDT (audio, below), which was after the ABC7 news anchor reported Hillary’s death. Was that the real Hillary speaking to Cooper? There has been a lot of faking and lying going on with this whole thing. Also a Powdered Wig reader, Janice Marie, reported that “Yesterday, I commented on this, that I thought someone dubbed the video. That was wrong. Later, I saw another video by info wars, where they actually called the station. This was correct, they did report this, but told the caller that it was a mistake. The guy at ABC couldnt say whether it showed up on their teleprompter or the news caster said it on his own. At any rate, the guy at ABC didnt seem upset, nor did he appologize for this error.”

Joe Torres is the reporter who claimed on air that Hillary Clinton is dead. I have seen no official retraction, but will continue to look. Clinton’s alleged phone interview with Anderson Cooper….

UPDATE – 9/13/2016, 6:05 AM CDT: We continue to search for updated information on this story. Reports now are that Hillary Clinton did in fact die at Montefiore Medical Hospital in the Bronx. We will continue to scour the web for updates and publish them as soon as they are available.

I am only the messenger here. Make of this what you will. Anything is possible at this point with this crazy woman in this crazy campaign.

According to SuperStation95, “‘The opening line…. seems edited-OUT of the video archive!

Did Hillary die after leaving the 9-11 Ceremony in New York . . .  and the information is being concealed?  A whole slew of irregularities have cropped-up indicating that may actually be the case!

Here is the video segment  from the 11:00 PM ‘Eyewitness News’ broadcast of September 11, 2016 in which Anchorman Joe Torre seems to say Hillary Clinton is DEAD:” 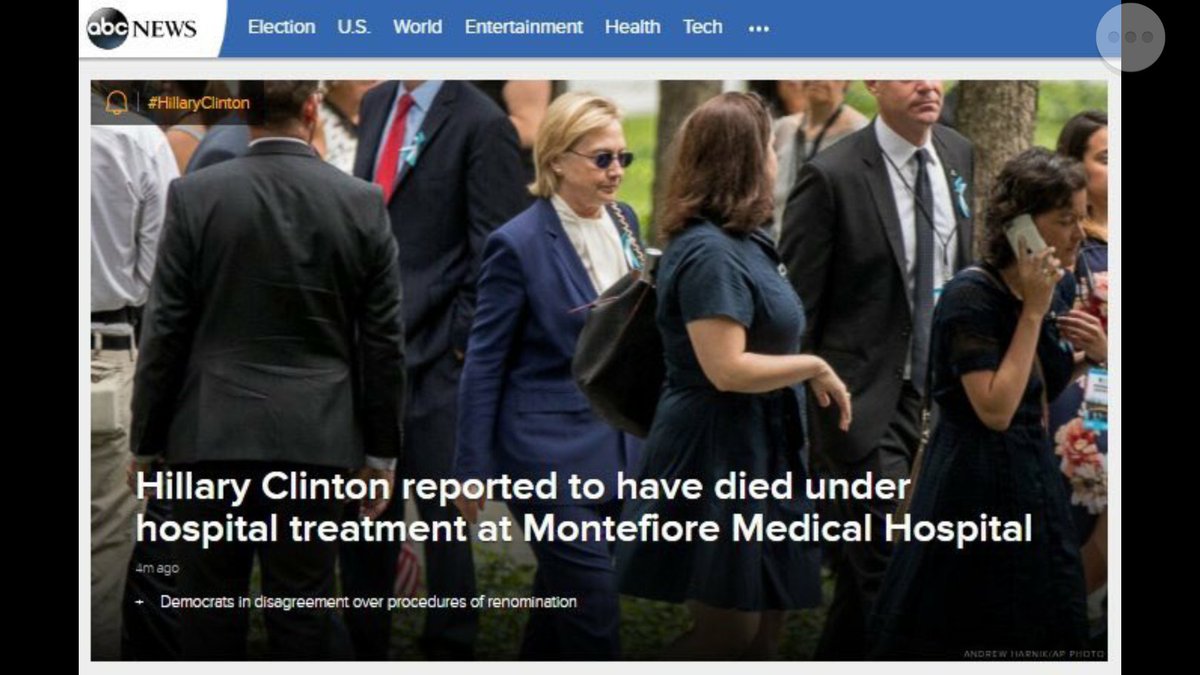