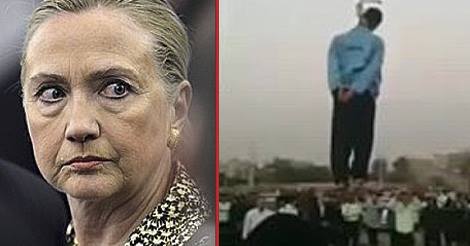 Photo, above: The individual on the left is former Secretary of State, garden variety scumbag, and presidential candidate, Hitlery Clinton, who also claims the title of Wicked Witch of Benghazi.

The individual on the right was Shahram Amiri, an Iranian nuclear scientist who provided the US with information regarding Iran’s nuclear program. He was hung as a spy by Iran for giving secrets to America.

It is not certain how Iran discovered that Amiri was providing information to the United States, but it is certain that Hitlery Clinton and others in the State Department were discussing Amiri openly by name on a private email system using an easily hackable unsecure server.

According to Washington Examiner, “Hillary Clinton recklessly discussed, in emails hosted on her private server, an Iranian nuclear scientist who was executed by Iran for treason, Sen. Tom Cotton, R-Ark., said Sunday.”

“I’m not going to comment on what he may or may not have done for the United States government, but in the emails that were on Hillary Clinton’s private server, there were conversations among her senior advisors about this gentleman,” he said on “Face the Nation.” Cotton was speaking about Shahram Amiri, who gave information to the U.S. about Iran’s nuclear program.

The senator said this lapse proves she is not capable of keeping the country safe.

“That goes to show just how reckless and careless her decision was to put that kind of highly classified information on a private server. And I think her judgment is not suited to keep this country safe,” he said.

The revelation could cause further political damage to Clinton, who was already on the defensive Sunday after commenting oddly last week that she had “short-circuited” in a statement related to her honesty about the email scandal.

Republican nominee Donald Trump seized on the statement to question her mental stability.

Iran confirmed on Sunday that Amiri had been hanged for treason. He was convicted of spying charges in a death sentence case that was upheld on appeal, according to the Associated Press.

“This person who had access to the country’s secret and classified information had been linked to our hostile and No. 1 enemy, America, the Great Satan” a spokesman for the Iranian judiciary said. “He provided the enemy with vital and secret information of the country.”

His body was returned to his mother with rope marks around the neck.