Ruth Bader Ginsburg vows to move to New Zealand if Trump is elected. She should be impeached for her clear political bias. She is a Supreme Court Justice, not a talk show host

Looking more like Granny Clampett, that opinionated old biddy from the Beverly Hillbillies, than an esteemed Supreme Court Justice, Ruth Bader Ginsberg  is alarmingly unequivocal regarding her contempt for Donald Trump, and has announced that she is moving to New Zealand if Trump is elected.

Alarming because she represents the pinnacle of judicial impartiality, the United States Supreme Court, that beacon of so-called nonpartisan fairness, where everyone receives the purest quality of objective judgement. Unless, of course, you happen to be a conservative and patriot. Then, all bets are off and you are fair game to certain leftist personalities on the bench, which flies in the face of the very cornerstone principles of the Supreme Court’s foundation.

Apparently not giving a hoot (Granny’s word, not mine) for fairness and justice, the worn out old leftist hag has made it clear that if Donald Trump is elected president, then she is New Zealand bound.

I say, “why wait?” Beat it now. She may want to wait until September when for a better airfare deal, but if she will agree to leave now, I will pay the difference.

In my opinion the leftist tool should be impeached and impeached now. She has nary (Granny’s word, not mine) an impartial bone in her body, and is thoughtless enough to back up her toxic and malicious contempt for conservative thought with language that should see her removed from any case in which her hatred for Donald Trump and conservatism may be an issue, and that is just about all of them. 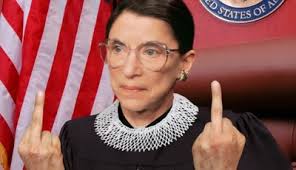 It’s a political cliche at this point to joke about moving to another country if a certain presidential candidate doesn’t win. Gobs of Americans were headed to Canada if George W. Bush was reelected in 2004. A similar contingent threatened to flood across our northern border when Barack Obama was elected and reelected.

Most justices aren’t Ruth Bader Ginsburg, though. And in a new New York Times interview, Ginsburg doesn’t hold a thing back when it comes to the 2016 election.

Ginsburg also recalled something her late husband said about such matters: “Now it’s time for us to move to New Zealand.”

This appears to be a joke, but Ginsburg’s sentiment here is crystal clear: She thinks Donald Trump would be a dangerous president. And in saying it, she goes to a place justices almost never do — and perhaps never have — for some very good reasons.

Ginsburg is known for pushing the bounds of a justice’s public comments and has earned something of a cult following on the left. But some say she just went too far.

“I find it baffling actually that she says these things,” said Arthur Hellman, a law professor at the University of Pittsburgh. “She must know that she shouldn’t be. However tempted she might be, she shouldn’t be doing it.”

I ❤️ RBG but I don't think our Supreme Court justices should be publicly offering their opinions about POTUS candidates.

2/2 If there's a redo of Bush v. Gore, how does Ginsburg not recuse herself, given her Trump comments?

And that’s really a key reason justices don’t talk like Ginsburg did. Sometimes they have to hear cases involving political issues and people. Having offered their unprompted opinions about such things can lead to questions about prejudice and potential recusal from future cases.

As Greenfield notes, Ginsburg was a part of the court that decided who the president was when the 2000 election was thrown to the Supreme Court, so this isn’t uncharted territory. Had she said something similar about either Bush or Al Gore, would she have been able to hear the case?

Louis Virelli is a Stetson University law professor who just wrote a book on Supreme Court recusals, titled “Disqualifying the High Court.” He said that “public comments like the ones that Justice Ginsburg made could be seen as grounds for her to recuse herself from cases involving a future Trump administration. I don’t necessarily think she would be required to do that, and I certainly don’t believe that she would in every instance, but it could invite challenges to her impartiality based on her public comments.”

Hellman said Ginsburg’s comments could muddy the waters when it comes to decisions not just involving Trump but also his policies — something that could come up regularly should he win the presidency.

“It would cast doubt on her impartiality in those decisions,” Hellman said. “If she has expressed herself as opposing the election of Donald Trump, her vote to strike down a Trump policy would be under a cloud.”

Ed Whelan, president of the Ethics and Public Policy Center and who once clerked for conservative Justice Antonin Scalia, has criticized Ginsburg before for her public comments. But he said this one is more indefensible than any of its predecessors.

“I think this exceeds the others in terms of her indiscretions,” Whelan said. “I am not aware of any justice ever expressing views on the merits or demerits of a presidential candidate in the midst of the campaign. I am not a fan of Donald Trump’s at all. But the soundness or unsoundness of her concerns about Donald Trump has no bearing on whether it was proper for her to say what she said.”

Rick Hasen, a law professor at the University of California at Irvine, said it’s valid to question how Ginsburg might have to handle a potential Trump case — up to and including a Clinton v. Trump case.

“I think this is ultimately a question for judicial ethicists, but I do think following these comments it is a legitimate question to raise, should Donald Trump’s campaign come to the Court with any legal questions before the election,” Hasen wrote on his blog.