Are they setting Huma Abedin up to be Hitlery’s fall gal?

Is Huma falling for Hitlery? For some strange reason (go figure) scrutiny into Hitlery’s email malfeasance has shifted to Huma Abedin.

While she is by no means an innocent bystander in this egregious violation of federal law and national security, it seems weird that Abedin is being investigated for anything more than being an accessory.

As I was instructed as a young Army officer over and over, “A LEADER is responsible for all that his or her soldiers do and do not do.” That certainly applies here. Hitlery did not exactly lead by example.

Is Huma being set up for the fall? 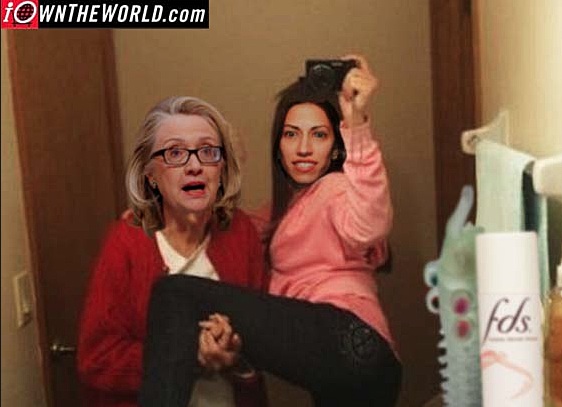 Even more potentially damaging, of the 110 emails Abedin forwarded to her personal email servers, 45 were found by WND to have contained heavily redacted information, with some 20 of the emails 100 percent redacted. Many have a bold “PAGE DENIED” stamped on the page.

In other words, almost half of the emails that Abedin forwarded to her unsecured personal account have information the State Department deems too sensitive to be seen by members of Congress or the American people.

WND identified that approximately 45 emails that Abedin forwarded to one of her two private email addresses were redacted,

On Oct. 15, 2015, prior to Abedin’s testimony in front of the House Select Committee, National Review reported the State Department explained the domain name of [email protected][redacted] was redacted to comply with a personal-privacy exemption.

On Aug. 14, 2015, the Washington Times reported that the State Department had admitted to a federal judge that Abedin and Cheryl Mills, chief of staff to Clinton when she was secretary of state, used personal email accounts to conduct government business in addition to Clinton’s private clintonemail.com to transact State Department business.

But until the Judicial Watch release this week, there was no proof Abedin had used her private email accounts as a forwarding address for State Department emails that contained sensitive material, including classified information.

It is not clear why Abedin found it necessary to forward State Department emails to her personal account.

WND reported Thursday more than one-third of the 725 pages released by Judicial Watch this week were 100 percent redacted.

The new email release also shows Abedin left classified government information that needed to be burned in the front seat of her vehicle.

WND reported in 2012 Abedin was listed as an assistant editor for 12 years of a journal published by an Islamic institute co-founded by her father focused on how Muslims should conduct themselves under Islamic law in non-Muslim lands for the purpose of spreading Islam.

Another co-founder of her father’s Institute for Minority Affairs was Abdullah Naseef, former director of the Muslim World League and founder of Rabita Trust, which was designated as a terrorist organization by the George W. Bush administration and is reputed to have funded al-Qaida. Abedin’s mother, Saleha Mahmood Abedin, is the editor of the Journal of Muslim Minority Affairs and a member of the Muslim Sisterhood, a branch of the Muslim Brotherhood.
Read more at http://mobile.wnd.com/2016/08/huma-abedin-forwarded-sensitive-material-to-personal-email/#h2lpVtqf8QZ3rKTE.99