Hitlery Clinton is engineering a coup that will make Mike Pence president, according to Julian Assange

I have grown to like Vice-President Mike Pence more and more since Inauguration Day, but I still wonder where his true loyalty lies. It is clear that he is in awe of his boss and the movement he is a key part of. I believe in my heart he would do nothing to jeopardize his place in that history, nor to violate the sacred trust and confidence placed in him by We the People.

However, I understand fully that Pence’s history has been that of an establishment politician and that he was a compromise running mate put on the ticket by candidate Trump in a deal with the establishment RNC to gain that organization’s support and loyalty, such as it was.

In the beginning, I didn’t trust Pence AT ALL! Not long before he became a viable running mate for Donald Trump, he was endorsing and was fully in the tank for Canadian Cruz, a rattlesnake of an establishment hack if there ever was one.

Julian Assange has “sources” who are claiming that Hitlery Clinton is engineering a coup that will place Pence in the presidency in the not-so-distant future. Like all things engineered by Hitlery, it is likely to turn into a steaming pile of corrupt incompetence.

From The Conservative Treehouse

Against the backdrop of intelligence reports pointing toward the U.K. as the source of President Obama’s covert surveillance over Candidate and President-Elect Trump; a claim  from U.K. London resident (Ecuadorian embassy captive) Julian Assange takes on additional dimension.

Assange is essentially claiming the Pro-Clinton Deep State institutional systems are working toward the elimination of President Trump (via congressional action), and then replacing Trump with Vice-President Pence: 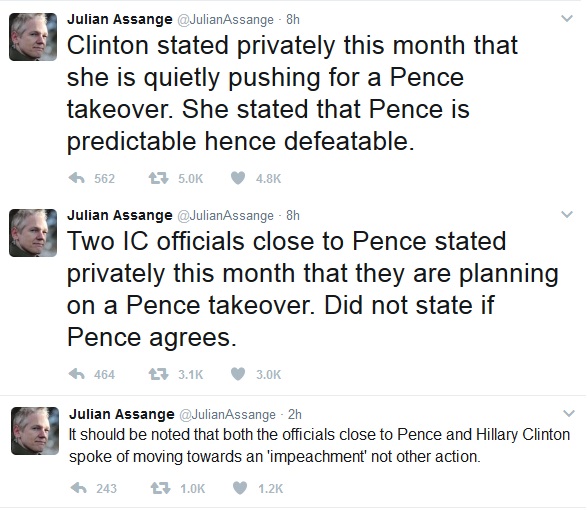 While it might be disconcerting to see, on its face this is not a revelation.  There is no surprise within a claim that various DC based interests would be much better positioned if a more traditional politician was occupying the White House.

President Trump has begun a deliberate process of deconstructing entire DC based institutions.  You don’t remove a trillion dollars in spending from the budget, direct the State Department to anticipate a thirty percent decrease and simultaneously notify the U.N. they will lose 50% of their funding, without sending shock waves throughout the swamp.

And we all know Hillary Clinton is exponentially more favorable to the entrenched political systems within the globalist cabal inside the state department…. so, it is not really a revelation to discover the subjects within those institutions would be earnestly supporting any process that would eliminate the existential threat that is President Trump.

All of that said, Vice-President Pence responded today during a call into the Laura Ingraham radio show: