According to Dr. Wolf, “Hillary’s doctor just claimed Hillary had a perfect score on a test that doesn’t exist.” The test in question is a CTA, a chest cat scan.

There is only one problem with that, according to Dr. Wolf. “There is no such thing as a ‘CTA calcium score.'”

Dr. Wolf concluded: There’s no need for wild speculation or sensationalization. Hillary’s health problems are (1) knowable and (2) highly significant. This is my wheel house.

“Hillary’s doctor just claimed Hillary had a perfect score on a test that doesn’t exist.” 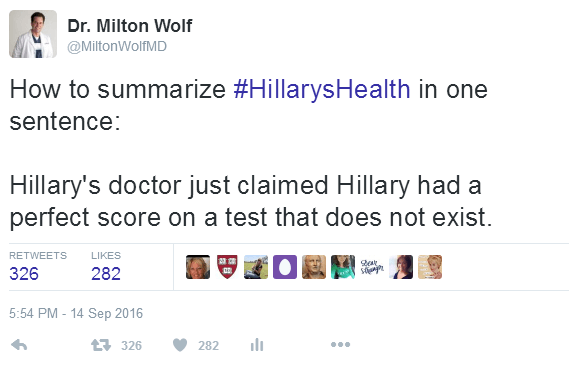 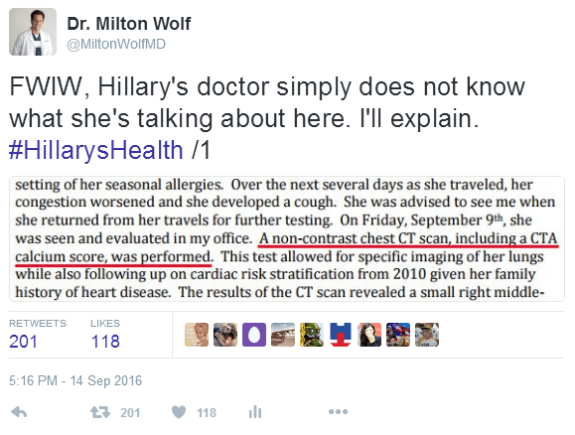 “There is no such thing as a “CTA calcium score” study. A CT calcium score study (of the coronary arteries) MUST be non-contrast.”

◘ They blamed the clots on a concussion. Not a chance. Concussions don’t cause blood clots. It would take a skull fracture with tearing of the dural sinus.

◘ She is on lifelong Coumadin. This is highly significant. Dangerous drug. Blood thinner. It’s clear she has a hypercoagulable disorder despite their denials. Coumadin carries a substantial risk for patients, particularly those with fall risk. Spontaneous hemorrhage common, intracranial and elsewhere. I see it commonly, including life-threatening brain bleeds. Normal, healthy patients are NEVER, NEVER prescribed Coumadin.

My conclusions (and I’m right about these):

◘ HC clearly has an underlying hypercoagulable blood disorder. That’s the only reason to give Coumadin (other than chronic atrial fibrillation and prosthetic heart valves, which are actually themselves causes of hypercoagulable disorders).

◘ Her hypercoagulable is likely severe. There are safer blood thinners than Coumadin. They’ve tried them on her (Lovenox) and it failed. Coumadin is typically given to those who can’t afford the newer drugs or reserved for cases that are refractory to the safer drugs. Coumadin is a powerful and dangerous drug; originally developed as a rat poison (Warfarin).

And the big one:

◘ It’s more likely than not that Hillary suffered a stroke in 2012 that they called a concussion. Stroke is extremely common following sinus thrombosis (of patients with clot in SSS: 75% stroke and 60% have intracranial hemorrhage). Overall about half the cases of sinus thrombosis resolve completely but that’s obviously not her since she exhibits and confesses to lasting neurological deficits. This is med school 101 stuff.