Hitlery may soon have to answer for the missing $6 billion from the State Dept. Just another scandal. Nothing to see here, folks. Move along 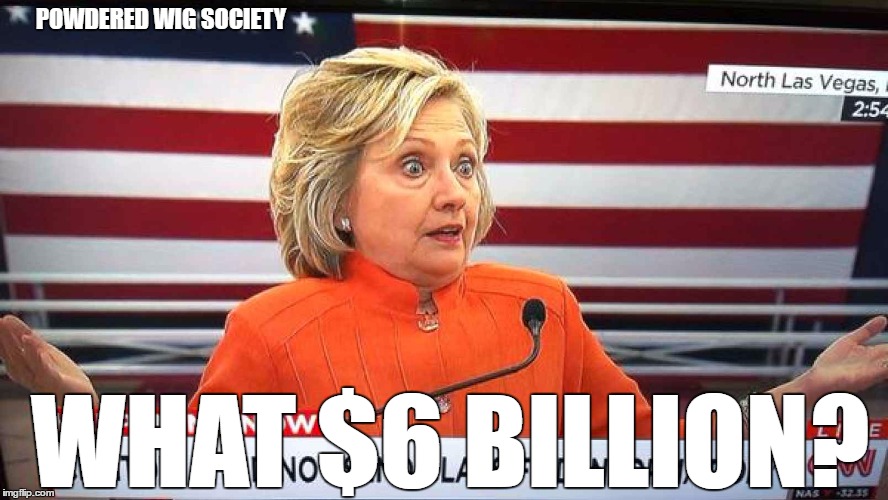 So, exactly how long must we endure the charade that Hitlery Clinton is a competent, honest, trustworthy individual, worthy of the office of President of the United States?

I don’t care how the Alphabet Network Club forces the “sweet and benevolent Hillary” narrative down the throats of the mouth-breathing morons who slurp the media slop willfully and beg for more, Hitlery Clinton is a corrupt, incompetent, vile, nasty criminal of a witch, and you would have to have just returned to Earth from Mars to not know that. Or you would have to be simply mentally unfit to enter a voting booth.

Six billion dollars disappeared under Hitlery’s watch as Secretary of State, which is an incomprehensible amount of money to most Americans. This is how much money $6,000,000,000 is….

Six billion dollars is enough money to pay every family (household) in Philadelphia or Phoenix $10,000 each. Every single family in a large American city! It is YUUUUGE money, and under Hitlery’s leadership at the State Department it all simply disappeared. No accountability whatsoever. And yet she is not only running for President of the United States, she is leading according to the major pollsters, possibly another bit of liberal corruption underway. And there will be much, much more corruption and it will get worse as long as the Wicked Witch of Benghazi is in any position of power and authority.

According to The Daily Caller in the article below Hitlery may soon be forced to answer questions, hopefully under oath, regarding the missing fortune.

Each and every person in the United States who votes for such a vile, corrupt, incompetent, and sick person as Hitlery for president should have their voting rights revoked and/or forcibly exiled for treason.

Democratic presidential nominee Hillary Clinton may soon have to answer questions about an estimated $6 billion in contract mismanagement, fraud and incompetence that happened under her watch at the Department of State.

“The total value of the contracts the [IG] reviewed exceeded $6 billion,” the CofA’s FOIA request said. “Many of these cases arose during the tenure of Secretary Hillary Clinton.” Clinton was the country’s top diplomat from January 2009 to February 2013.

The IG alert that unveiled the mismanagement was based on three investigations and two contract-related audits.

In a blistering summary, the IG alert said such failures create “conditions conducive to fraud, as corrupt individuals may attempt to conceal evidence of illicit behavior by omitting key documents from the contract file. It impairs the ability of the department to take effective and timely action to protect its interests and, in turn, those of taxpayers. Finally, it limits the ability of the government to punish and deter criminal behavior.”

Among the examples cited by the IG were:

The CofAI said “the public has a significant interest in knowing whether the department implemented the recommendations the [IG] made in its previous reports … the requested records will further inform the public about the resolution of contract management problems with the Department of State.”

The State Department has 20 working days to prepare an initial response to CofAI’s request.