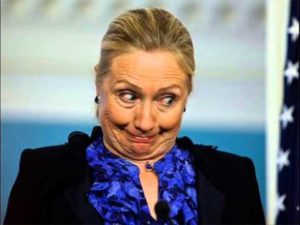 Finally, we have confirmation of what is causing Hitlery Clinton’s bizarre behavior, such as freaking out on stage, freezing in abject fear, coughing spells, fits of seemingly uncontrolled laughter at the most inappropriate times, and trouble with stairs.

In a leaked letter from her personal physician, Dr. Lisa Bardack (below), Hitlery has been diagnosed with Subcortical Vascular Demetia, also known as  Binswanger’s Disease.

Exactly what is Binswanger’s Disease, you ask. I had the same question. At first I suspected it was a disorder a woman suffers when her husband’s wanger has bin somewhere else. I thought it was a good guess. I was wrong.

According to the National Institute of Neurological Disorders and Stroke, “Binswanger’s Disease (BD), also called subcortical vascular dementia, is a type of dementia caused by widespread, microscopic areas of damage to the deep layers of white matter in the brain. The damage is the result of the thickening and narrowing (atherosclerosis) of arteries that feed the subcortical areas of the brain. Atherosclerosis (commonly known as “hardening of the arteries”) is a systemic process that affects blood vessels throughout the body…. BD is a progressive disease; there is no cure.” 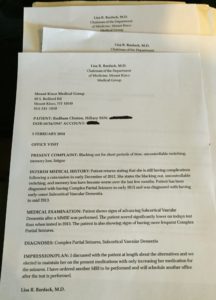