Former State Department official and MD has declared that Hitlery is physically, mentally, and emotionally unfit to serve, and is demanding release of her medical records

Tim Kaine may have hit the political powerball jackpot! Come November, he could find himself only a heartbeat away from the presidency, and it is not a very steady nor reliable heartbeat.

Should Hitlery Clinton be elected in November, God Forbid, I see no way she can handle the daily stress of serving as Commander-in-Chief, which would make Kaine, who Americans know almost nothing about, President of the United States. Scary proposition!

I know only two things about Tim Kaine – he is a former governor of Virginia and he is the author of this quote: “When my wife told me she wanted to open our marriage and take other lovers, she wasn’t rejecting me, she was embracing herself.” 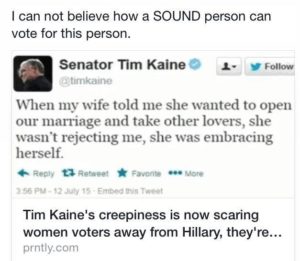 I’m sorry, Tim, your wife was not embracing herself. She was embracing someone else, or at least craving embracing someone else. So what if you suck in bed. At least she will still let you pay the bills. Maybe you can pay her lover’s bills too. You are such a sport! Your wife is lucky to have a moron, I mean a man, like you.

Pardon my digression. Back to Hitlery’s VERY serious health issues.

Should there not be a physical and mental health exam for all presidential candidates, certified by an independent, nonpartisan physician? Is that too much too ask? Pro athletes have to do it. Members of our armed forces have to do it. Lots of jobs require that the employee be of sound health. But NOT the world’s most important job? Really?

I reckon Democrats figure if dead people can vote, then one can surely serve as President of the United States.

There have been many episodes of late of Hitlery freezing onstage, having to be rescued by her handler, who is also believed to be her personal physician. Check out one such episode in the tweet below.

There are multiple symptoms that point to a variety of illnesses, from Parkinson’s to drug addiction to STD. Hitlery has recently been prone to coughing fits, inappropriate outbursts of laughter, being disoriented, speechless and frozen onstage, loss of balance, strange twitches and apparently uncontrollable rapid head movements. And then there is the tongue lesion, which could be a symptom of syphilis, figured to be a gift from her dear, sweet husband.

Adding to my argument that there should be a health certification for presidential candidates, a former State Department official and medical expert has declared that Hitlery is not fit to serve as President of the United States, and is demanding release of her medical records.

According to Infowars, Medical expert and former State Dept. official Dr. Steve Pieczenik agreed, stating at this point Hillary “is not qualified, physically, mentally or emotionally to be President of the United States.”

“I would say that she has a brain tumor, neuroblastoma, or that she has possibly an onset of Alzheimer’s disease which begins as what we would call Subcortical Vascular Dementia,” said Dr. Pieczenik on The Alex Jones Show Tuesday. “I demand that she have an independent medical neurological evaluation by people who are neither Republican nor Democrat, to evaluate her mental status and physical status to be the President of the United States.”

“I demand that Columbia College of Physicians and Surgeons release the records on the neurological workup of a potential President of the United States.”