Uh-oh! Could be very bad news for Hitlery. The techie who deleted her emails has been granted immunity from prosecution

The techie who actually deleted all of Hitlery’s emails has been granted immunity by the Justice Department.

WASHINGTON — A computer specialist who deleted Hillary Clinton’s emails despite orders from Congress to preserve them was given immunity by the Justice Department during its investigation into her personal email account, according to a law enforcement official and others briefed on the investigation.

Republicans have called for the department to investigate the deletions, but the immunity deal with the specialist, Paul Combetta, makes it unlikely that the request will go far. Representative Jason Chaffetz of Utah, the top Republican on the House oversight committee, asked the Justice Department on Tuesday to investigate whether Mrs. Clinton, her lawyers or the specialist obstructed justice when the emails were deleted in March 2015.

Mr. Combetta is one of at least two people who were given immunity by the Justice Department as part of the investigation. The other was Bryan Pagliano, a former campaign staff member for Mrs. Clinton’s 2008 presidential campaign, who was granted immunity in exchange for answering questions about how he set up a server in Mrs. Clinton’s home in Chappaqua, N.Y., around the time she became secretary of state in 2009.

The F.B.I. described the deletions by Mr. Combetta in a summary of its investigation into Mrs. Clinton’s account that was released last Friday. The documents blacked out the specialist’s name, but the law enforcement official and others familiar with the case identified the employee as Mr. Combetta. They spoke on the condition of anonymity because they did not want to be identified discussing matters that were supposed to remain confidential.

Brian Fallon, a spokesman for Mrs. Clinton’s presidential campaign, said that the deletions by the specialist, who worked for a Colorado company called Platte River Networks, had already been “thoroughly examined by the F.B.I. prior to its decision to close out this case.” 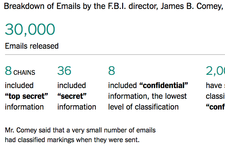 Graphic (above)| What We Know About Hillary Clinton’s Private Email Server A private email server used by Hillary Clinton while she was secretary of state has been the focus of a half-dozen inquiries and legal proceedings.

“As the F.B.I.’s report notes,” Mr. Fallon said, “neither Hillary Clinton nor her attorneys had knowledge of the Platte River Network employee’s actions. It appears he acted on his own and against guidance given by both Clinton’s and Platte River’s attorneys to retain all data in compliance with a congressional preservation request.”

A lawyer for Mr. Combetta and a spokesman for the Justice Department declined to comment.

In July, the F.B.I. director, James B. Comey, announced that the bureau would not recommend that Mrs. Clinton and her aides be charged with a crime for their handling of classified information on the account.

Five days later, Mr. Chaffetz — who has led the charge in raising questions about the F.B.I.’s decision — asked prosecutors to investigate whether Mrs. Clinton had lied to Congress about her email account in testimony in October before the special committee investigating the 2012 attacks in Benghazi, Libya. That request has been met with silence from the Justice Department.

The House oversight committee has asked officials from Platte River Networks, Mr. Combetta and others to appear at a hearing before his committee on Tuesday about how the email account was set up and how the messages were deleted.

According to the F.B.I. documents, Mr. Combetta told the bureau in February that he did not recall deleting the emails. But in May, he told a different story.

In the days after Mrs. Clinton’s staffers called Platte River Networks in March 2015, Mr. Combetta said realized that he had not followed a December 2014 order from Mrs. Clinton’s lawyers to have the emails deleted. Mr. Combetta then used a program called BleachBit to delete the messages, the bureau said.

In Mr. Combetta’s first interview with the F.B.I. in February, he said he did not recall seeing the preservation order from the Benghazi committee, which Mrs. Clinton’s lawyer, Cheryl D. Mills, had sent to Platte River. But in his May interview, he said that at the time he made the deletions “he was aware of the existence of the preservation request and the fact that it meant he should not disturb Clinton’s email data” on the Platte River server.