Basking in the warm adulation of her devoted fans, some adoring, some paid, Hitlery Clinton accepted the Sleazeball Party nomination for president

I missed the fun last night. I couldn’t bear watching or listening to the Wicked Witch of Benghazi and her trained seals, applauding loudly on cue, cheering and howling at jokes that would have bankrupted a lounge league stand-up comic.

Not all in attendance were foaming-at-the-mouth Hitlery sycophants. Some were actually paid to fill the nosebleed seats of the supporters of former candidate and already fading memory, Bernie Sanders.

Ben Shapiro described last night’s circus as well as anyone I have read. This is a gem! 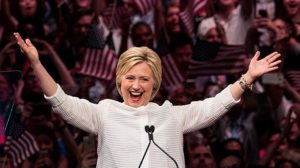 From Ben Shapiro, The Daily Wire

Thursday night, after an interminable speech by boring young Chelsea Clinton introducing her boring old mother, Hillary Clinton, Hillary finally took to the stage. She wore all white. Like an angel. Like a saint. Like an erased server.

And she proceeded to talk.

For fifty-five interminable minutes, the grating old crone spake nonsense into the gaping ears of a gullible media. She spoon-fed them lies about policy. She dropped phrases so hackneyed they ought to have been roasted on an open fire. Still the media cheered.

No matter that the Bernie Bros made trouble throughout, chanting against her. No matter that at certain points, Hillary’s face turned Bilbo-Baggins-yearning-after-Frodo’s-ring. The media, like Samwise Gamgee, would try to carry her over the finish line.

But she’s simply too heavy for any mortal to bear. Her candidacy is an albatross, a millstone. The speech wasn’t just boring. It was ear cancer. It was ebola of the cochlea. She said nothing, and said it poorly.

One thing is clear: Chelsea Clinton got her mother’s gift of gab.

Perhaps the only memorable moments were these: Hillary attempting to look lifelike, instead reciting her speech with the robotic, uncanny-valley creepiness to which we’ve become accustomed; Bernie Sanders nearly weeping when Hillary name-checked him — his face changing momentarily as he grinned the mirthless grin of pure, unadulterated rage; Hillary glaring at the audience that refused to accept her seizure of the throne; Bill glancing around, dazed and happy at the thought that perhaps, just maybe, Hillary would be out of the house for another four years; Hillary talking of glass ceilings, forgetting that nobody thinks she got where she is legitimately; the media furiously pleasuring itself to the pleasant tones of Hillary’s rocks-in-the-garbage-disposal delivery; Hillary cackling at her own wit, the soul-sucking giggle of the damned.

No, this won’t help Hillary. How could it? At least half of her allies died of old age in the middle of the speech, prematurely aged by the sour-lemon oratory. The ratings for this speech must be fabulous – before viewers died, they forgot to turn the channel.

But no matter. There are three more months of this horror. Somewhere, Mitt Romney weeps that he didn’t have the courage to jump into this race. Somewhere, Gary Johnson feels a momentary pang of hope, which he then quickly snuffs out with a blunt. Somewhere, the American people – those who aren’t convinced in their politics by Katy Perry or another rendition of the sophomoric “Fight Song” – think about the end.