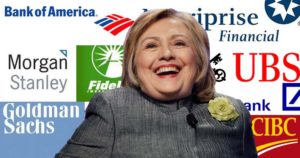 “Crooked Hillary,” indeed! The Donald knows of which he speaks.

While screaming her shrill anti-Wall Street message to adoring fans out one side of her mouth, Hitlery has apparently had another message when behind closed doors with big Wall Street donors. Whatever that message is, those Wall Street donors must have really liked it, as they have pumped $122.7 million into her campaign for president.

Donald Trump, on the other hand, has received a paltry $19,000 from Wall Street. It is pretty easy to see who the puppet of Wall Street is. Just follow the money.

From The Wall Street Journal

Hedge funds are playing a far bigger role in 2016 than in past elections—and Hillary Clinton has been the single biggest beneficiary.Owners and employees of hedge funds have made $122.7 million in campaign contributions this election cycle, according to the nonpartisan Center for Responsive Politics—more than twice what they gave in the entire 2012 cycle and nearly 14% of total money donated from all sources so far.

The lines around what constitutes a hedge fund aren’t always clear in the data, or in the financial industry. But the numbers are stark. The top five contributors to pro-Clinton groups are employees or owners of private investment funds, according to federal data released last week and compiled by OpenSecrets.org, the center’s website. The data show seven financial firms alone have generated nearly $48.5 million for groups working on Mrs. Clinton’s behalf.

Mr. Trump, of course, didn’t start actively soliciting campaign contributions until recently and even shunned outside political groups working on his behalf. Hedge-fund employees have contributed heavily to other Republican groups this cycle—$65.8 million so far—mainly in support of candidates who opposed Mr. Trump in the primaries. Some who had supported other Republican candidates are now beginning to give to pro-Trump groups.