Hitlery’s new campaign ad paints Trump as a KKK hero, even though it was she who accepted a $20,000 campaign donation from the KKK and belongs to the party that founded the KKK 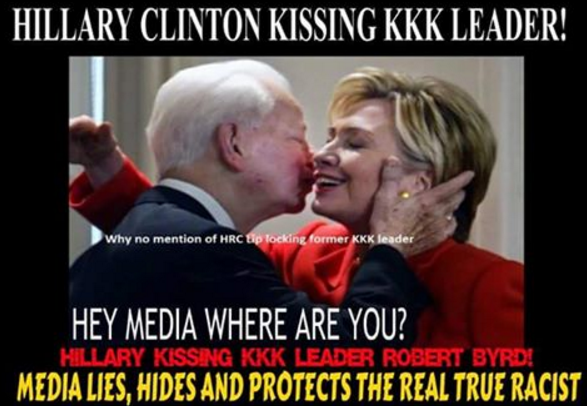 Hitlery actually believes that she can pin the KKK label on Donald Trump, even though it is she who has had ties to the KKK, like her tongue wrestling match with KKK leader Robert Byrd, who was also a Democrat and a US Senator from West Virginia.

This is a golden opportunity for The Donald to knock this one out of the park. All he needs to do is respond with the truth, as follows….

Hitlery’s stupid ad that, if Trump is smart, will blow up in her hideous face….

According to The Washington Times, “Hillary Clinton’s presidential campaign has received more than $20,000 in donations contributed by members of theKu Klux Klan, a prominent member of the hate group said Monday.

‘For the KKK, Clinton is our choice,’ said Will Quigg, California Grand Dragon for the Loyal White Knights, Vocativreported.

Mr. Quigg, the leader of the Klan’s California chapter, announced last month that he had abandoned supporting Republican presidential front-runner Donald Trump in lieu of backing his likely Democratic opponent. The Klansman claims that members have raised more than $20,000 for Mrs. Clinton and have donated it anonymously to her campaign.

‘She is friends with the Klan,’ Mr. Quigg told Vocativ.’ A lot of people don’t realize that.'”

Check the video, below, from Bill Whittle. He is spot on regarding the historical relationship between the KKK and the racist Democrat Party. Although I disagree with a few of his finer points, he is correct that it was the Democrat Party who were racist and pro-slavery, and it was the Republican Party that championed black inclusion into American society and promoted total equality.

A former Confederate general, Nathan Bedford Forrest, a Democrat, and several other Tennessee Democrats, began the KKK as an enforcement arm of the Democrat Party. And enforce they did, murdering many black and white Republicans.

The Democrat Party was the party of racism in those days and since. Not until LBJ pulled the wool over the eyes of blacks, convincing them that the Civil Rights movement of the sixties was an altruistic and benevolent initiative of the Democrat Party, did blacks shift their allegiance from the Republican Party to the Democrat Party. It was LBJ who said in the mid-sixties, “I’ll have those niggers voting Democratic for the next 200 years.”

Many blacks are waking up to the truth, and it is only a matter of time and education before they all return home to the all-inclusive Republican Party and real national healing can begin.

Here are few other historical truths that counter the liberal narrative that has been forced upon the black community….

Fact: The Republican Party was founded primarily to oppose slavery, and Republicans eventually abolished slavery. The Democratic Party fought them and tried to maintain and expand slavery. The 13th Amendment, abolishing slavery, passed in 1865 with 100% Republican support but only 23% Democrat support in congress.

Why is this indisputable fact so rarely mentioned? PBS documentaries about slavery and the Civil War barely mention it, for example. One can certainly argue that the parties have changed in 150 years (more about that below), but that does not change the historical fact that it was the Democrats who supported slavery and the Republicans who opposed it. And that indisputable fact should not be airbrushed out for fear that it will tarnish the modern Democratic Party.

Had the positions of the parties been the opposite, and the Democrats had fought the Republicans to end slavery, the historical party roles would no doubt be repeated incessantly in these documentaries. Funny how that works.

Fact: During the Civil War era, the “Radical Republicans” were given that name because they wanted to not only end slavery but also to endow the freed slaves with full citizenship, equality, and rights.

Yes, that was indeed a radical idea at the time!

Fact: Lincoln’s Vice President, Andrew Johnson, was a strongly pro-Union (but also pro-slavery) Democrat who had been chosen by Lincoln as a compromise running mate to attract Democrats. After Lincoln was assassinated, Johnson thwarted Republican efforts in Congress to recognize the civil rights of the freed slaves, and Southern Democrats continued to thwart any such efforts for close to a century.

Regardless of what has happened since then, shouldn’t we be grateful to the Republicans for these Amendments to the Constitution? And shouldn’t we remember which party stood for freedom and which party fiercely opposed it?

Fact: The Ku Klux Klan was originally and primarily an arm of the Southern Democratic Party. Its mission was to terrorize freed slaves and “ni**er-loving” (their words) Republicans who sympathized with them.

Why is this fact conveniently omitted in so many popular histories and depictions of the KKK, including PBS documentaries? Had the KKK been founded by Republicans, that fact would no doubt be repeated constantly on those shows.

Fact: In the 1950s, President Eisenhower, a Republican, integrated the US military and promoted civil rights for minorities. Eisenhower pushed through the Civil Rights Act of 1957. One of Eisenhower’s primary political opponents on civil rights prior to 1957 was none other than Lyndon Johnson, then the Democratic Senate Majority Leader. LBJ had voted the straight segregationist line until he changed his position and supported the 1957 Act.

Fact: Contrary to popular misconception, the parties never “switched” on racism. The Democrats just switched from overt racism to a subversive strategy of getting blacks as dependent as possible on government to secure their votes. At the same time, they began a cynical smear campaign to label anyone who opposes their devious strategy as greedy racists.

Following the epic civil rights struggles of the 1960s, the South began a major demographic shift from Democratic to Republican dominance. Many believe that this shift was motivated by racism. While it is certainly true that many Southern racists abandoned the Democratic Party over its new support for racial equality and integration, the notion that they would flock to the Republican Party — which was a century ahead of the Democrats on those issues — makes no sense whatsoever.

It is true that Barry Goldwater’s opposition to the Civil Rights Act of 1964 probably attracted some racist Democrats to the Republican Party. However, Goldwater was not a racist — at least not an overt racist like so many Southern Democrats of the time, such as George Wallace and Bull Connor. He publicly professed racial equality, and his opposition to the 1964 Act was based on principled grounds of states rights. In any case, his libertarian views were out of step with the mainstream, and he lost the 1964 Presidential election to LBJ in a landslide.

Every political party has its racists, but the notion that Republicans are more racist than Democrats or any other party is based on nothing more than a constant drumbeat of unsubstantiated innuendo and assertions by Leftists, constantly echoed by the liberal media. It is a classic example of a Big Lie that becomes “true” simply by virtue of being repeated so many times.

A more likely explanation for the long-term shift from Democratic to Republican dominance in the South was the perception, fair or not, that the Democratic Party had rejected traditional Christian religious values and embraced radical secularism. That includes its hardline support for abortion, its rejection of prayer in public schools, its promotion of the gay agenda, and many other issues.

In the 1960s the Democratic Party changed its strategy for dealing with African Americans. Thanks to earlier Republican initiatives on civil rights, blatant racial oppression was no longer a viable political option. Whereas before that time Southern Democrats had overtly and proudly segregated and terrorized blacks, the national Democratic Party decided instead to be more subtle and get them as dependent on government as possible. As LBJ so elegantly put it (in a famous moment of candor that was recorded for posterity), “I’ll have those niggers voting Democratic for the next 200 years.” At the same time, the Democrats started a persistent campaign of lies and innuendo, falsely equating any opposition to their welfare state with racism.

From a purely cynical political perspective, the Democratic strategy of black dependence has been extremely effective. LBJ knew exactly what he was doing. African Americans routinely vote well over 90 percent Democratic for fear that Republicans will cut their government benefits and welfare programs. And what is the result? Before LBJ’s Great Society welfare programs, the black illegitimacy rate was as low as 23 percent, but now it has more than tripled to 72 percent.

Most major American city governments have been run by liberal Democrats for decades, and most of those cities have large black sections that are essentially dysfunctional anarchies. Cities like Detroit are overrun by gangs and drug dealers, with burned out homes on every block in some areas. The land values are so low due to crime, blight, and lack of economic opportunity that condemned homes are not even worth rebuilding. Who wants to build a home in an urban war zone? Yet they keep electing liberal Democrats — and blaming “racist” Republicans for their problems!

Washington DC is another city that has been dominated by liberal Democrats for decades. It spends more per capita on students than almost any other city in the world, yet it has some of the worst academic achievement anywhere and is a drug-infested hellhole. Barack Obama would not dream of sending his own precious daughters to the DC public schools, of course — but he assures us that those schools are good enough for everyone else. In fact, Obama was instrumental in killing a popular and effective school voucher program in DC, effectively killing hopes for many poor black families trapped in those dysfunctional public schools. His allegiance to the teachers unions apparently trumps his concern for poor black families.

A strong argument could also be made that Democratic support for perpetual affirmative action is racist. It is, after all, the antithesis of Martin Luther King’s dream of a color-blind society. Not only is it “reverse racism,” but it is based on the premise that African Americans are incapable of competing in the free market on a level playing field. In other words, it is based on the notion of white supremacy, albeit “benevolent” white supremacy rather than the openly hostile white supremacy of the pre-1960s Democratic Party.