Hitlery’s fib du jour involves disabled children (no one is exempt from her lies and exploitation). People who were there confirm that she is lying her ass off 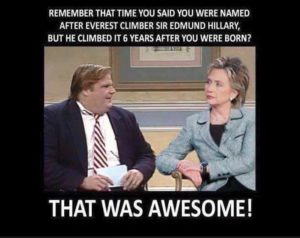 Lie detection experts have concluded that there is a surefire way to tell when Hitlery Clinton is lying. When her lips are moving.

Her latest departure from the truth involves disabled children in New Bedford, Massachusetts in 1973. Hitlery claims that she remembers “meeting a young girl in a wheelchair on the small back porch of her house. She told me how badly she wanted to go to school — it just didn’t seem possible in  those days.” And this isn’t a lie she told a friend (presuming she has one) in private. She told this lie to the world, on global television, onstage, while accepting the Democrat nomination for president. OK, so only 27 people saw it. It is still a lie!

Great story for the kind of gullible dumbasses who filled the seats at the Democrat National Convention, except it isn’t true. Not a word of it! According to school officials who were on the ground in New Bedford in those days, the Wicked Witch of Benghazi is lying her ass off AGAIN!

Remember when Hitlery claimed that she was named after Sir Edmund Hillary who was unknown until he climbed Mt. Everest six years AFTER Hitlery was born. LMAO!

Or how about the time she channeled her inner Brian Williams, telling the story of landing under sniper fire in Bosnia, when actually the most dangerous people she encountered were small children bearing gifts.

Or how about leaving the White House dead broke and in debt. LOL! I reckon legal fees defending Slick against a seemingly harmless blue dress were more than the First Couple could bear financially, so they stole $200,000 in White House furnishings when they left. What a yard sake that must have been!

And then there’s Benghazi. A lie a minute, starting with the video and the poor guy who went to jail for Hussein’s and Hitlery’s lie.

This link is to a great video featuring Hitlery’s campaign manager discussing the Wicked Witch of Benghazi’s disassociation with the truth…. The Lying Louse of Chappaqua 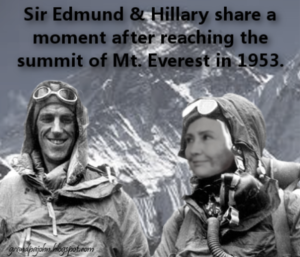 New Bedford leaders are livid at Hillary Clinton’s depiction of the Whaling City as a place where handicapped children were abandoned at home because the schools lacked accommodations for youngsters with special needs.

“It’s not true,” former Mayor Jack Markey told the Herald yesterday. “I’m even a Democrat, but the truth is the truth.

“We would take handicapped kids in a small van to schools that could take them,” said Markey, who served on a local board that helped disabled children before he was elected mayor in 1971. “I would have been aware of a child needing help to go to school. The truth is we  had access.”

Clinton, in her speech accepting the Democratic Party’s nomination for president Thursday night, recalled working for the Children’s Defense Fund in New Bedford in 1973, looking into why 2 million kids were reported as not going to school nationwide.

“I remember meeting a young girl in a wheelchair on the small back porch of her house,” Clinton said. “She told me how badly she wanted to go to school — it just didn’t seem possible in  those days.”

Campaign spokesman Josh Schwerin said last night “Clinton went door-to-door in a New Bedford neighborhood with a large Portuguese and Cape Verdean population and found disabled school-age children who felt that it was impossible for them to  attend school.”

But the story has shocked numerous New Bedford officials who ran the city and school  system then.

Joseph Silva, a retired superintendent of New Bedford Schools and principal of Ingraham Elementary School when the Children’s Defense Fund investigators combed through the city in 1973, said the girl in Clinton’s story would have had the option of being transported to an accessible school.

“Kids weren’t left to flounder,” Silva said. “That’s been historically the culture in New Bedford that the needs that children  had were met in whatever ways necessary.”