Perfect! Hitlery is on rat poison. I’m serious. After all, she is a rat! 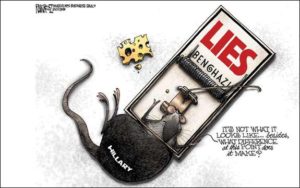 OK, so she enjoys a little rat poison before bedtime. Is that so wrong!?

The rumors they are a flying as to exactly what is wrong with Hitlery Clinton. She has been freaking out onstage, having coughing spells, laughing fits at completely inappropriate times, like when she howled about Gadaffi’s brutal murder and two heroes about to lose their lives on a rooftop in Benghazi.

Coumadin is also known as Warfarin, which is a blood thinner on steroids, so effective a blood thinner that it is the active ingredient in rat poison. Ingesting Warfarin causes mice and rats to bleed to death internally.

Warfarin is also very toxic to the liver. Combined with the Wicked Witch of Benghazi’s well-known drinking habits, it is lethally dangerous.

So, is Hitlery’s obvious malady causing her bizarre behavior or is she just bizarre naturally? And what is that malady? Is it Parkinson’s, a brain tumor, a reaction to her medications, or some combination of the three. Hard to say at this point, but should Hitlery prevail in November, God forbid, I’ll lay odds on there being a President Tim Kaine in the not so distant future.

Another Merlot with a sprinkle of D-CON, barkeep.

Major media are rushing to do damage control on Hillary’s health. They’re trying to lay down the concrete of a fake consensus that she’s fine, because her doctor issued a positive report in 2015. (See here).

But one of the bottom lines is: she’s suffered from dangerous blood clots. And the treatment is blood-thinners, which are given to reduce the possibility of a fatal clot.

It’s a rat poison. It kills rats by causing them to bleed out internally. This is a fact.

Therefore, the prescribing doctor and the patient walk a tightrope. How much Coumadin is too much? How little is too little? Too much, and life-threatening bleeding can occur. Too little and fatal blood clots can occur.

Therefore, Hillary is being monitored VERY closely, on a weekly basis, with tests. But the tests aren’t mathematically precise. The monitoring isn’t ironclad science.

And since Coumadin is highly toxic, serious liver damage is a consequence, especially when the drug is given long-term, which is the case here.

You put someone on Coumadin, long-term, and you’re rolling the dice. In her case, this treatment is back-against-the-wall, last-line-of-defense.

If her past blood clots were somehow interpreted as minor or incidental, long-term Coumadin would never be the treatment of choice.

The last thing you would want this patient to do is engage in day-to-day, high-stress activity. You would definitely not want the patient to fly in airplanes, because that activity can exacerbate her condition. Lethally.

Her major media allies (and they are, of course, many) have no genuine interest in her health risks. They would be able to handle her as President, even if she turned out to be dead on arrival.

Her closest aides, and her husband, are aware of all these facts. They’re shrugging them off and pressing for a victory in the election this fall. That’s the game plan, come hell or high water.

But the blood clot problem and rat poison problem aren’t going to go away.

Any honest doctor will tell you that.

Whether Hillary has Parkinson’s, whether she has trouble maintaining her balance, whether she has “brain-freezes”…yes, these are all subjects for discussion. But either way, the blood clots and the Coumadin are putting her on a cliff’s edge.

Politics aside, the refusal of major media to bring this into the light on a serious basis is insane.