Hitlery Clinton is still the frontrunner in the Democrat 2016 presidential primary, even though she appears to be in some pretty serious hot water. Is she the only loser the Democrats can hang their hats on? It’s sad, but I reckon so!

Not all of the emails have been examined, but already there are two that have been categorized as extremely sensitive and classified as Top Secret when they were emailed, one involving the movement of North Korean nukes, the other concerning a drone strike. 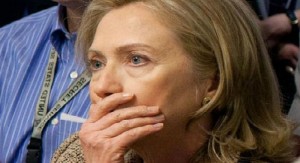 EXCLUSIVE: An intelligence community review has re-affirmed that two classified emails were indeed “top secret” when they hit Hillary Clinton’s unsecured personal server despite a challenge to that designation by the State Department, according to two sources familiar with the review.

The sources described the dispute over whether the two emails were classified at the highest level as a “settled matter.”

The agencies that owned and originated that intelligence – the CIA and National Geospatial-Intelligence Agency or NGA – reviewed the emails to determine how they should be properly stored, as the State Department took issue with their highly classified nature. The subject matter of the messages is widely reported to be the movement of North Korean missiles and a drone strike. A top secret designation requires the highest level of security, and can include the use of an approved safe.

The sources, who were not authorized to speak on the record, told Fox News that while the emails were indeed “top secret” when they hit Clinton’s server, one of them remains “top secret” to this day — and must be handled at the highest security level. The second email is still considered classified but at the lower “secret” level because more information is publicly available about the event.

The findings have been transmitted to the State Department, which continues to challenge the intelligence community’s conclusions about the classification of all the emails. But the department has no authority to change the classification since it did not originate the information.

On Nov. 6, Politico reported that the intelligence community was retreating from the “top secret” classification, a development that could have helped Clinton’s presidential campaign deflect allegations about mishandling classified material. Fox News can confirm it is true the handling of one email has changed since it was drafted and sent, but this change has no bearing on the “top secret” nature of the emails when first received on Clinton’s server. And this is what matters to the FBI probe.

While the classification finding is important, the central issue is whether the FBI investigation concludes there was or was not a criminal violation.