HITLERY BUSTED! Connecting the dots between a Project Veritas video and an FEC doc places the crosshairs of guilt squarely and personally on Hitlery!

H/T Joe LaVeque
THIS is the smoking gun we have been looking for! Hitlery has been paying scumbags to riot at Trump rallies, where people have been seriously injured, including law enforcement officers. It is documented and on video!

We published an article on Monday that centered on an investigative video (below) from Project Veritas. In the video reporters secretly filmed conversations with Democrat operatives who were and are being paid to incite rioting at Trump rallies. Many innocent people have been hurt along the way.

Fast forward to the 10:25 mark in the video, below. The young lady you are seeing is Zulema Rodridguez. She is bragging about being responsible for the mayhem at the Chicago Trump rally, which was canceled due to extreme violence, as well as the highway shutdown in Arizona that blocked the route to a Trump rally.

Smug little punk Scott Foval, who was fired yesterday from Hitlery’s troop of flying monkeys due to this video, is boasting throughout how the money that pays these scumbag agitators flows through various organizations to give Hitlery “plausible deniability.” I guess he didn’t know that Rodriguez was cutting out the middle men and communicating directly with Hitlery’s staff and the DNC “every day at one o’clock.” Oops!

Here is the nail in the Wicked Witch’s coffin. Following a lead from a Reddit post I went to the FEC website and searched the archives for disbursements to Zulema Rodriguez for 2015 and 2016. Here is my screenshot, below. Note the last entry on this page.

Hillary for America is the fundraising arm of Hitlery’s campaign. It paid Zulema Rodriguez $1,610.24 DIRECTLY in payroll on 2/29/2016, as well as $30 for a cellphone. THIS is the doc that has Hitlery’s fingerprints on it! And it is an official government document from the Federal Election Commission. 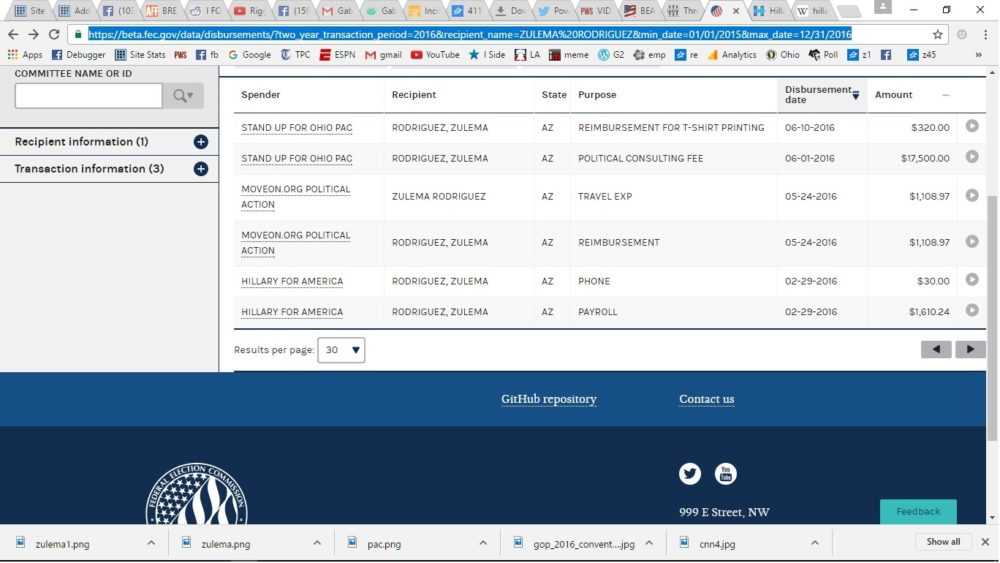 Go to the bottom of Hitery’s official campaign website and you will see the following….

Paid for by Hillary for America, a grassroots campaign of over 2 million donors committed to electing Hillary Clinton (and keeping Donald Trump out of the White House), confirmation that Hitlery’s campaign was directly involved with and funding rioters to create violence at Donald Trump campaign rallies.