Hitlery greeted by 6 whole supporters in Beaumont, TX, proceeds to a $500K fundraiser with Muslim group. Move along. Nothing to see here, folks!

Photo, above: If ever there was an argument for a woman to completely cover her face, this is it! 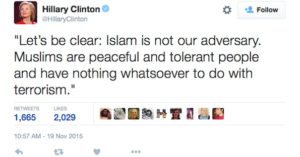 Some estimates put the amount collected at half-a-million dollars, making it one of the top five private fundraisers Clinton has had in this country.

Pakistani businessman Tahir Javed hosted the reception for Clinton at this home in West Beaumont.

Former U.S. Representative Nick Lampson, who attended the event, says 250 people were there.

Lampson says Clinton spoke about education, healthcare and individual freedoms for people of all backgrounds and faiths.

Many of the Pakistanis at the event were pleased with Clinton’s vocal support of the Muslim religion.

Aisha Zahid said, “Talking about Muslims and favoring Muslims,so I really appreciate her whatever effort she is making against Islamaphobia, so I really think she needs to be the next President of the United States.”

But not everyone was a fan.  A handful of protesters demonstrated near the event, over Clinton’s response to the Benghazi attack and her email controversy.