Hitlery is DONE! So far, 1,340 classified emails have been discovered, some of them “beyond Top Secret,” says US intelligence official

Every time Hitlery Clinton wore that ugly orange pantsuit, I thought it looked like a prison uniform. Maybe I was thinking ahead.

How this woman can be considered a legitimate candidate by the Democrats is beyond me. She is facing some very serious criminal charges. 100 FBI agents are involved in the investigation of her private email server and the many classified emails she apparently sent into unsecured cyberspace for our enemies to easily intercept. So far, an incredible 1,340 classified emails have been discovered from the emails Hitlery turned over. Just imagine what was in the deleted emails and the “wiped” server.

Hitlery is apparently guilty of compromising the most sensitive information, known as SAP (special access programs), which is a classification beyond Top Secret. I spent seven years on active duty in the Army, all of it with a Top Secret security clearance, and I have never heard of SAP. 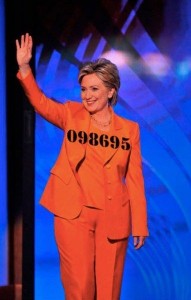 Hillary Clinton’s personal email server from her time as secretary of state included documents that go beyond “top secret” classification.

The letter was sent to the leadership of the House and Senate intelligence committees and leaders of the Senate Foreign Relations Committee, as well as the Office of the Director of National Intelligence and State Department inspector general.

Roughly 100 FBI special agents are assigned to an investigation that will determine if the former secretary of state violated a subsection of the Espionage Act related to “gross negligence” in handling government documents. Dozens of agents were required to sign non-disclosure forms before examining classified information and trying to determine whether co-mingling of the Clinton Foundation and State Department business violated public corruption laws.

At least three sources in the intelligence community told the network that FBI agents would be “screaming” if the Justice Department did not seek to prosecute Clinton.

“To date, I have received two sworn declarations from one [intelligence community] element. These declarations cover several dozen emails containing classified information determined by the IC element to be at the confidential, secret, and top secret/sap levels,” said the IG letter to lawmakers with oversight of the intelligence community and State Department, Fox reported. “According to the declarant, these documents contain information derived from classified IC element sources.”

The total number of classified emails found on Clinton’s server stands at 1,340 as of last week’s document dump by the State Department. Clinton disputed that number during a Sunday appearance on CBS’ “Meet the Press.”

“More and more and more of these messages that turn out to be classified is going to put more pressure on the prosecutors to make a decision as to what they’re going to do. It looks very serious, this many messages,” national defense attorney Ed Macmahon told Fox.

The ‘Stop Hillary’ campaign is on fire! Join the surging response to this theme: ‘Clinton for prosecution, not president’

A former senior law enforcement official told the network there was “absolutely no way” Clinton would not have recognized SAP material the moment it was received.

“It is the most sensitive of the sensitive,” the source said.

Representatives for intelligence community inspector general and ODNI had no comment on Fox’s investigation, but did not challenge its findings.

Former CIA Director David Petraeus was prosecuted by the Justice Department for sharing intelligence from special access programs with his mistress, Paula Broadwell.

The retired four-star general pleaded guilty to a misdemeanor in April 2015. He was sentenced to two years of probation and ordered to pay a $100,000 fine.
Read more at http://www.wnd.com/2016/01/beyond-top-secret-emails-found-on-hillarys-server/#PP4gIzzg1kIQ7swX.99