VIDEO: Former SEAL: Hillary is an “arrogant, ignorant, and disrespectful liar.” True! Dems, if you have only sewer rats to run, don’t run

Pictured below is Hillary arriving in Bosnia as First Lady. How steely her nerves as she calmly waves to a legion of admirers:

“Look out, you brainless, mouth-breathing morons! You had better get down. Only the Hillary’s aura repels flying bullets.” 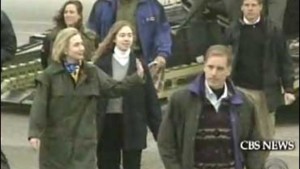 How is it possible that one of the two major political parties in America chooses only the most unworthy, dishonest scum to run for high office? No one even bats an eye any more as Hillary lies her way from speech to speech and interview to interview. It is expected. I think Americans may finally be tired of it.