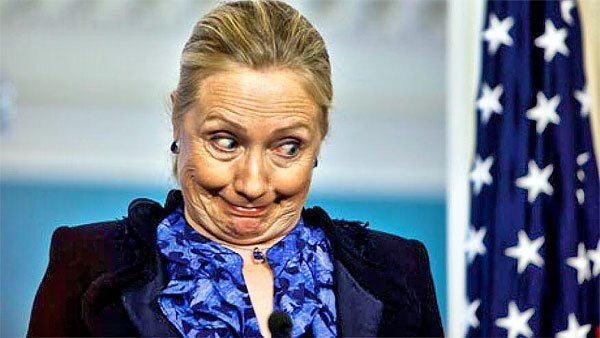 That pesky Julian Assange! Now he’s really gone and done it. His hack of the Wicked Witch of Benghazi’s computer has turned up some very interesting finds, like her internet search for “Durable Adult Diapers.”

Hitlery Clinton, whose super-double-secret spy name while Secretary of State was “Skid Mark,” apparently wears diapers, and not the flimsy cheapo ones like Pampers, either, but the industrial strength “Durable” ones, you know the extra strong premium variety that can conceal a 20-pound download while standing at the podium.

So, now we know why she has been freezing and freaking out onstage frequently. It wasn’t stage fright. She was downloading lunch!

According to ETF News, “Now however, it seems some people have found some literal “dirt” on the Democratic candidate Hillary Clinton. But suddenly the searches descend into the bizarre. This is unfortunate for her personally, but the fact that she has lied about her medical status in order to continue the race is absolutely disgusting.

What the public decides to do with this information remains to be seen, but this will without a doubt cast a brown shadow on not only Hillary’s campaign, but on her chances of ever becoming the president of the United States. WIKILEAKS uncover steamy information from private browser hacking. We spoke to Julian Assange about this leak: “I think this is probably the deciding piece of information that will absolutely destroy Hillary’s chances of ever becoming president of this country.

‘Durable Adult Diapers’ These bizarre search words seem to indicate that something is not right with Hillary Clinton. WIKILEAKS’ hackers managed to hack themselves into Hillary’s private browser on one of her on-trail laptops. And if that is in turn true, Clinton’s presidential fitness will come under extreme scrutiny. She’s absolutely finished. The presidential race is nearing its crescendo.

This afternoon, WIKILEAKS, the truth-seeking renegade web-organisation that leak private and classified information onto their website, published an astonishing find that will no doubt “soil” the public’s’ opinion of Hillary Clinton. Does Hillary have trouble holding it in? Sure, we might all be curious about the fact that some adults wear diapers for various reasons and do a Google search on it just to take a gander, but the fact that Clinton includes the adjective “durable” in her search seems to suggest that she’s actually shopping around for adult diapers.

They extracted the search history for the past two months and released them in a data-dump on their website. Here is the most disturbing search that was extracted. If this is indeed the case, which it might very well be, then Hillary is probably suffering from serious medical conditions and possibly even degenerative mental conditions such as dementia.

Everyday, more dirt on each candidate seems to seep out into the ether and perhaps momentarily sway the opinions of the “unwashed” masses. Julian Assange, the Australian leader of WIKILEAKS has in past months threatened to release information on Hillary, and has done so sporadically, but now he has truly issued his Trump card.

Whatever medical condition she has that causes her to be in need of this type of item, is bound to be debilitating to the body and perhaps also the mind. She will not last this. Some of the Google queries are ordinary and what you would expect from a presidential candidate such as “DNC convention capacity” and of course her own name “Hillary Clinton” which was searched over 1400 times over the period.”