CNN genius interviewer, Brooke Baldwin, sympathizing with poor Bowe Bergdahl, asks her guest and Green Beret veteran, Scott Mann, “You have those who…on the opposite end, vilifying him. Again, this is someone who was held for FIVE YEARS by terrorists! Is that not, this is what some say, is that not punishment enough?”

No, Brooke! That is not punishment enough. Bergdahl left his unit voluntarily. That is desertion, and there is a penalty for it, lest we destroy the morale of the entire Army. Furthermore, for all we know, Bergdahl was not a captive, but a willing Taliban cohort. It has been reported that he walked away from his unit looking for the Taliban. Well, he found them. Bergdahl clearly hated America, as evidenced by his emails (below). Amazingly, he has been paid $300,000 in back pay. So, an Army E-5, which Bergdahl wasn’t during his captivity, makes $60,000 a year? Really?

So, our dear leader swaps five high-value terrorist prisoners and $5 billion (as reported by LTC Tony Shaffer on Fox News) for a worthless deserter? Five high-value terrorist prisoners and FIVE BILLION HARD-EARNED AMERICAN TAXPAYER DOLLARS to a declared terrorist organization and enemy of the United States for a worthless deserter, who Obama has called a hero who has served with honor? And you, Brooke, feel sorry for this maggot?

Six ACTUAL American heroes (pictured below) lost their lives searching for Bergdahl, who claimed that he was ashamed to be an American and “the horror that is America is disgusting.” There is no report of Bergdahl having any moral objection to accepting the $300,000.

If you want to feel sympathy for scum, Brooke, you go right ahead. You have the freedom to speak as you wish. A lot of blood, sweat, and tears were paid for your freedom to exercise that right. As a veteran I have absolutely no respect or sympathy for poor Bowe Bergdahl or his contemptible commander-in-chief! 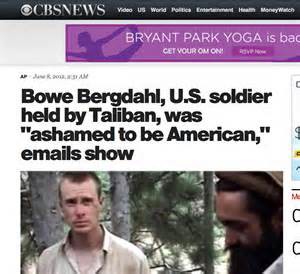