VIDEO: Thank you to all veterans, and enjoy the inspirational words of Ronald Reagan from his first inaugural address

Thank you to all of our veterans!

Making the conscious decision to join the military is not an easy one. Those who make that decision fully understand the risks. Yet, they enlist. When the call has been made they have stepped up, as did my father during WWII. The photo, above, is from the the Battle of Guadalcanal where my father fought as a 16-year old Marine.

Originally called Armistice Day, commemorating the truce that marked the official cessation of hostilities during WWII, which went into effect at the eleventh hour of the eleventh day of the eleventh month, in 1918, the name was changed to Veterans Day in 1954.

Veterans Day is not only celebrated in the United States, but also in in allied countries across the world, known as Armistice Day or Remembrance Day in some of those countries. On Wednesday I received a message on Powdered Wig’s facebook page from a Brit living in Australia who thanked me for my support of Donald Trump and promised to hoist a glass to me today in honor of my military service. Likewise, I will be doing the same for all veterans, past and present, who have written that blank check for up to and including their very lives that we at home may all live in freedom.

Martin A. Treptow, a young and obscure American private killed in France in World War I, was written into American history books by President Reagan today because of a letter Mr. Reagan received from an unidentified admirer.

Toward the end of his Inaugural Address, President Reagan spoke of monuments to heroism and, with a struggle to control his voice, drew attention to ”the sloping hills of Arlington National Cemetery with its row upon row of simple white markers.”

”Under such a marker lies a young man, Martin Treptow, who left his job in a small-town barber shop in 1917 to go to France with the famed Rainbow Division,” Mr. Reagan said.

After Pvt. Treptow was killed, a diary was found in which he had inscribed the following pledge: ”America must win this war. Therefore I will work, I will save, I will sacrifice, I will endure, I will fight cheerfully and do my utmost, as if the issue of the whole struggle depended on me alone.” Recalling Message of Letter

White House officials said that Mr. Reagan, wanting a passage for the address to illuminate his point of heroism, recalled the letter he had received earlier with the reference to Pvt. Treptow.

Mr. Reagan’s speech writers dug many of the facts about Pvt. Treptow out of the National Archives here and spent a day looking for his grave in Arlington, across the Potomac river.

Officials at the cemetery, however, said that Pvt. Treptow was buried in Bloomington, Wis. Further checking by researchers of The New York Times determined that he was buried in Bloomer, Wis., a small town in the northwestern part of the state. White House officials said Mr. Reagan did not mean to imply that the soldier was buried in Arlington.

While President Reagan may have turned Pvt. Treptow into a national hero, he was not entirely unknown before today. The American Legion posts in Bloomer, Wis., and Cherokee, Iowa, were named for him. Moreover, it appears that the pledge cited by Mr. Reagan may have been used before by President Wilson and by former Senator Guy Gillette, Democrat of Iowa.

Pvt. Treptow was born January 19, 1894, in Chippewa Falls, Wis., near Bloomer, where he grew up. He was working as a barber in Cherokee, Iowa, when the United States entered the war in 1917.

There he enlisted in the Iowa National Guard, which became the 168th Infantry Regiment, 84th Brigade, in the 42d ”Rainbow” Division when it was called to Federal service.

Pvt. Treptow was killed while serving as a runner, or courier, for Company M in the battle of the Ourcq River on July 29, 1918. 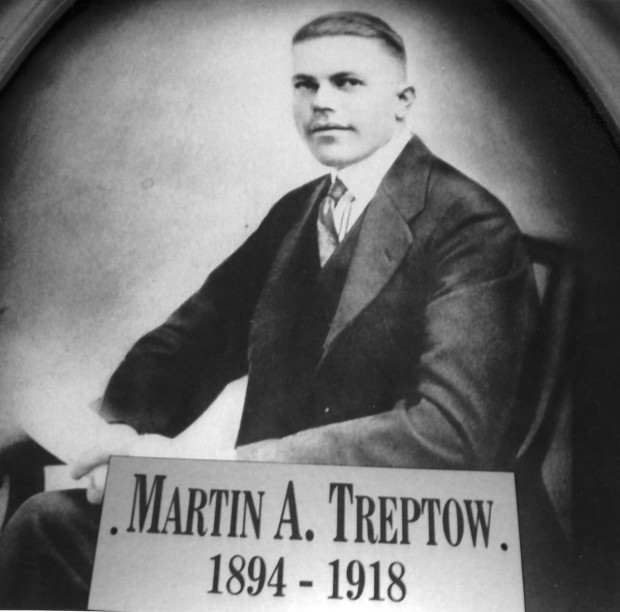