The ice caps are growing and polar bears are flourishing. Now Greenland has recorded its lowest July temperature in history, -27°F. Yet, Al Gore, other boneheads on the left and in the mainstream media, despite this in-your-face evidence, continue to scream and moan that global warming is going to kill us all

Yet, Al Gore, other boneheads on the left, and the mainstream media, despite this in-your-face evidence, continue to scream and moan that global warming is going to kill us all!

Unless, of course, you pass your wallets to the front and let Brother Al take care of everything. 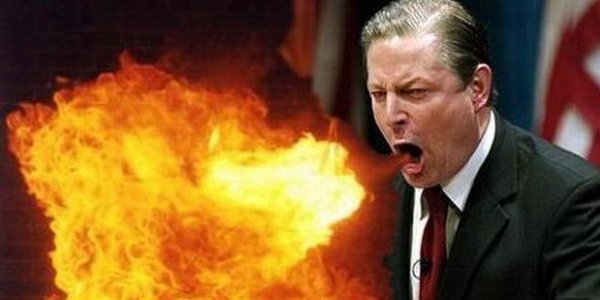 From Conservative Tribune
We keep on hearing about how global warming is making our planet hotter than ever. If you live in a third-floor beachfront condo, the left says, you’d better get ready to deal with seals swimming right outside your window — because that’s how fast the ice in the Arctic is melting.

There have been plenty of nails in the coffin of this sort of alarmism, but a new record in Greenland seems to be the latest piece of evidence the media is desperately trying to ignore. As climatologist Tony Heller points out at his blog, the Danish island territory just set its coldest July temperature on record.

In fact, it was the coldest temperature ever recorded in the Northern Hemisphere for the month of July: -33C (-27.4F).

The temperature was recorded at Summit Station on July 4. According to Vencore Weather, the normal high temperature at the 10,000 ft. high year-around research station is -10C (14F).

The loction of Summit Station and relevant weather graphs.

And that’s not all. “Much of Greenland has been colder-than-normal for the year so far and has had record or near record levels of accumulated snow and ice since the fall of last year,” Vencore noted.

“The first week of this month was especially brutal in Greenland resulting in the record low July temperature and it also contributed to an uptick in snow and ice extent — despite the fact that it is now well into their summer season.”

As you can see from this chart, the level of ice cover in Greenland has been increasing most of this year. You wouldn’t know it from the headlines, though.

Yes, in spite of the fact that we just set the coldest temperature in July in the entire Northern Hemisphere, and despite the fact Greenland gained a great deal of ice this year and is seeing it melting slowly, the only mention of Greenland in the mainstream media was as part of global warming alarmism. Typical.