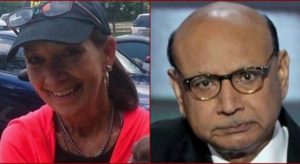 Wow! Blue Star mom, Anita Farries Kessler, sent a facebook message to Genghis Khan, the Muslim who lost a son in Iraq who was serving in the US Army. You can find Anita’s message at the following link, as part of a facebook thread…. To the Muslim Gold Star Father

I agree with Anita on every count and have published many of the same words and sentiments. Genghis and his wife are exploiting their son’s death, ostensibly to further the anti-American liberal agenda and/or make a buck, neither of which are noble motives, in my opinion.

How they can blame Donald Trump for ANYTHING related to this tragedy is beyond me. However, the women they came to praise can be, and should be, blamed. Hitlery Clinton is a scumbag of the first rank, and now Mr. and Mrs. Chaka Khan are supporting her 100%, even though she was apparently complicit in arming the very assholes who killed their son. Go figure!

I know martyrdom is the highest station amongst Muslims, and I’m sure that the Khans consider their son a martyr. My question is a martyr for who? For America or for Allah?

“To the Muslim Gold Star father that spoke at the DNC…..I have some thoughts on your comments. I am a Blue Star mother. My deepest condolences on the loss of your son. No family should have to endure such a loss. That being said….while your son is a hero, you Sir, are NOT. My son has served three tours of combat in the countries you and your family came from. Iraq and Afghanistan were his introduction to adulthood and service to something bigger than our individual selves. He was blown up by an IED set by your countrymen. His Purple Heart is a testament to his love of America and our freedoms. I have suffered through his multiple combat tours in Iraq and Afghanistan….never knowing from moment to moment if he would return home in a flag draped coffin. It is torture when a mother wakes up to this day after day and sees the atrocities happening over there on the news and being helpless to change a thing. My comments to you will probably offend you. I do not apologize. These things need to be said. Unlike you, I could NEVER use my son’s death as a pawn piece in support of a woman that left “America’s treasure” (Hillarys words) to die unaided in Benghazi. The same woman that says vile things to her military details there to protect her. You, Sir, are supposed to be a witness to your son’s bravery and sacrifice. Instead you stood on a stage and promoted the woman that upholds the very people that killed your son. You became a political PAWN that promotes pandering to our enemy. You desecrated your son’s memory by your words. You did not utter one word of outrage at anyone but Donald Trump. Are you forgetting that Trump did not kill your son. He had nothing whatsoever to do with these wars. His memory should mean more to you than five minutes of fame on the stage of the party that voted to send your son to war. The same party that for eight years has denied and cheated our veterans out of their deserved medical care. Who for the last three years has cut our veterans pay. Of note…your wife stood SILENT. She stood with her head covered, never uttering a word about her loss. She submitted to you being her voice in front of the country. She abdicated her free voice to you…..as would any good Sharia wife and mother. Let me say, this was not lost on the other American military moms….myself included. Had it been my son being “used” as a political PROP, no one could have silenced me. I would be voicing my grief, my pride, my love of him to the world. A man cannot speak to a mothers loss. No man knows her heart at the loss of a child. She did her heroic son a disservice by her silence. She should have uncovered her head and her heart to be the American mother you claim. And last if all….you dared to flash your picket Constitution and ask if Trump has read it. I dare to ask you, Sir….HAVE YOU READ IT? If you say yes, then I dare ask you HOW you could represent that party? HOW can you support this woman? How can you affiliate your family with a party and candidate that cannot even call the radicals that killed your son what they are? How can you support a current administration that diminishes your son’s death by denying he had an enemy? And if you have read our Constitution, how could you cover your soulmate in colorful submissive sheets and have the audacity to speak FOR her? Your son died for that Constitution you so carelessly waved around on national TV in support of the very party that exists to destroy it. As a soldier’s mother….NO ONE could ever speak for me. I find your outrage artificial. I find your party affiliation offensive. I find your wife’s silence atrocious and offensive. I find YOU a political FOOL. I find your son to have been your greatest accomplishment, and you, Sir, have dishonored him. I hope you memorize that picket constitution so you will understand what it means to be a REAL American and hero. You are not one. You were USED. Your son WOULD NOT be proud of you. My only hope is that when MY son goes a fourth time to combat radical Islamic terrorist’s, ( and he WILL) he will know that his mother never stood submissively SILENT about an American hero. Yes, your son was a hero that could not be manipulated but, you, Sir, are a weak minded FOOL. I would love to hear your thoughts this morning about the 1500 American soldiers on the air base in Turkey being held as basic hostages as I type. Not a word from this president or party you adore…or the media that so thoroughly manipulated and used you and your wife. So…what say you Sir??? What will you say to a Blue and Gold Star family if these heroes die? In my opinion, you will say NOTHING.”