What do you know, Kazoo Khan is guilty of gross conflict of interest. He has been getting paid to immigrate Muslims to America and is tied to the Clintons, the Democrats, and Saudi money

So, Genghis Khan, or Chaka Khan, or whatever his name is, has been all over the news and all over Trump’s bidness, slamming The Donald’s immigration policy, especially as it relates to prohibiting Muslim immigration.

You see, as it turns out, Genghis has a financial stake in seeing Trump defeated, and he doesn’t mind sacrificing his own son’s memory for a few pieces of silver.

Khan is an immigration attorney, specializing in, you guessed it, greasing the skids for well-heeled Muslims to schlep their way into the United States.

Now that his obvious conflict of interest has been exposed, Khan has deleted his website. No matter, the interwebs live forever. The Wayback Machine has provided a screenshot of Chaka Khan’s website…. KM KHAN LAW OFFICE 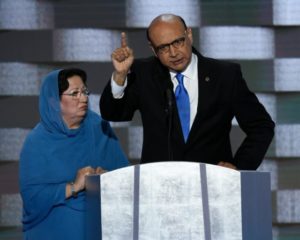 Speaking to the crowd of Democrat faithful at the Democrat National Convention, Khan waxed eloquent with his wife #17, Ghazala, at his side.

Genghis Khan is on the run. He has deleted his website, hoping to dodge controversy and embarrassment. Really? About the most embarrassing thing a person can do is speak at the Democrat National Convention.

Khizr Khan, the Muslim Gold Star father that Democrats and their allies media wide have been using to hammer GOP presidential nominee Donald J. Trump, has deleted his law firm’s website from the Internet.

This development is significant, as his website proved—as Breitbart News and others have reported—that he financially benefits from unfettered pay-to-play Muslim migration into America.

A snapshot of his now deleted website, as captured by the Wayback Machine which takes snapshots archiving various websites on the Internet, shows that as a lawyer he engages in procurement of EB5 immigration visas and other “Related Immigration Services.”

VIDEO: CLINTON SPEAKS OUT AGAINST CALL TO REGISTER MUSLIMS
The website is completely removed from the Internet, and instead directs visitors to the URL at which it once was to a page parking the URL run by GoDaddy.

The EB5 program, which helps wealthy foreigners usually from the Middle East essentially buy their way into America, is fraught with corruption. U.S. Senate Judiciary Committee chairman Sen. Chuck Grassley (R-IA) has detailed such corruption over the past several months, and in February issued a blistering statement about it.

“Maybe it is only here on Capitol Hill—on this island surrounded by reality—that we can choose to plug our ears and refuse to listen to commonly accepted facts,” Grassley said in a statement earlier this year. “The Government Accountability Office, the media, industry experts, members of congress, and federal agency officials, have concurred that the program is a serious problem with serious vulnerabilities. Allow me to mention a few of the flaws.”

Grassley’s statement even noted that the program Khan celebrated on his website has posed national security risks.

“There are also classified reports that detail the national security, fraud and abuse. Our committee has received numerous briefings and classified documents to show this side of the story,” Grassley said in the early February 2016 statement. “The enforcement arm of the Department of Homeland Security wrote an internal memo that raises significant concerns about the program. One section of the memo outlines concerns that it could be used by Iranian operatives to infiltrate the United States. The memo identifies seven main areas of program vulnerability, including the export of sensitive technology, economic espionage, use by foreign government agents and terrorists, investment fraud, illicit finance and money laundering.”

Khan spoke alongside his wife Ghazala Khan at the Democratic National Convention last week in Philadelphia, and they were honoring their son U.S. Army Captain Humayun Khan—a hero who lost his life to a suicide bomber in Iraq in 2004. On behalf of Hillary Rodham Clinton, the Democratic nominee for president, Khizr Khan ripped into Donald Trump’s policies on immigration—specifically bashing his plan to bar Muslim migration from regions afflicted with rampant terrorism into America temporarily until the United States can figure out what’s going on.

Khan even brought out a pocket Constitution, claiming inaccurately that Trump’s plans were unconstitutional. That’s not true, as Congress has already granted such power to the president under the Immigration and Nationality Act of 1952—allowing the president to bar migration of any alien or class of aliens the president sees as a threat to the United States for any reason at any time. Such a class of aliens could be Muslims, or it could be people from a specific region of the world, or any other class—such as someone’s race, weight, height, age, national origin, religion, or anything else.

The media, along with Hillary Clinton and her supporters throughout the Democratic Party establishment, has pushed the line of attack against Trump for days. Now on Tuesday, President Barack Obama has said that Trump is “unfit” to serve as President over the matter. Even a group of anti-Trump congressional Republicans has gone after Trump on the matter.

But as Breitbart News and other new media have exposed Khan’s various deep political and legal connections to the Clintons—and to Muslim migration—the attack line has crumbled. Now, with Khan deleting his website in an apparent effort to hide his biographical information, the attack is falling apart even more.