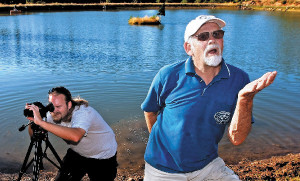 A rural Oregon man was sentenced Wednesday to 30 days in jail and over $1,500 in fines because he had three reservoirs on his property to collect and use rainwater.

Gary Harrington of Eagle Point, Ore., says he plans to appeal his conviction in Jackson County (Ore.) Circuit Court on nine misdemeanor charges under a 1925 law for having what state water managers called “three illegal reservoirs” on his property – and for filling the reservoirs with rainwater and snow runoff.

“The government is bullying,” Harrington told CNSNews.com in an interview Thursday.

“They’ve just gotten to be big bullies and if you just lay over and die and give up, that just makes them bigger bullies. So, we as Americans, we need to stand on our constitutional rights, on our rights as citizens and hang tough. This is a good country, we’ll prevail,” he said.

The court has given Harrington two weeks to report to the Jackson County Jail to begin serving his sentence.

Harrington said the case first began in 2002, when state water managers told him there were complaints about the three “reservoirs” – ponds – on his more than 170 acres of land.

According to Oregon water laws, all water is publicly owned. Therefore, anyone who wants to store any type of water on their property must first obtain a permit from state water managers.

Harrington said he applied for three permits to legally house reservoirs for storm and snow water runoff on his property. One of the “reservoirs” had been on his property for 37 years, he said.

Though the state Water Resources Department initially approved his permits in 2003, the state – and a state court — ultimately reversed the decision.

“They issued me my permits. I had my permits in hand and they retracted them just arbitrarily, basically. They took them back and said ‘No, you can’t have them,’ so I’ve been fighting it ever since,” Harrington told CNSNews.com.

The case, he said, is centered on a 1925 law which states that the city of Medford holds exclusive rights to “all core sources of water” in the Big Butte Creek watershed and its tributaries.

Harrington told CNSNews.com, however, that the 1925 law doesn’t mention anything about colleting rainwater or snow melt — and he believes that he has been falsely accused.