Photo, above: A view of the construction site where Ford Motor Co cancelled a $1.6 billion plant in Villa de Reyes, on the outskirts of San Luis Potosi, Mexico, January 4, 2017. REUTERS/Christine Murray

Ford has recently abandoned the construction of its planned Mexican production facility due to President-elect Donald Trump’s promise to slap a fat tariff on foreign goods in an effort to restore America’s economy and prosperity. And Mexico is in a tizzy. Its planned economic centerpiece, the $1.6 billion Ford plant in San Luis Potosi now looks like a cemetery, according to Reuters.

While I sympathize with the unfortunate position this has put Mexico in, I will by no means be crying a river, and the following photos are why….

This is what much of Detroit, Michigan looks like today. Detroit, once the most affluent city on the planet due to its auto industry, has lost half of its population, is rife with crime and unemployment, and all because of NAFTA. We the People have been transferring our wealth to foreign countries, including Mexico, for decades. Why? Because our leaders have been incompetent or on the take. I don’t know which, I am just glad someone (Donald Trump) is here to fix it. 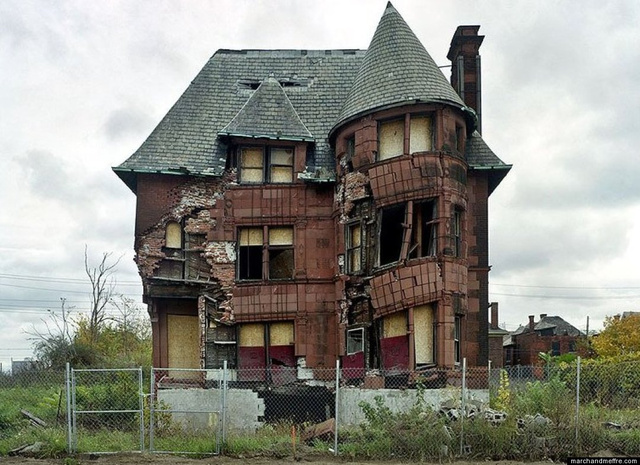 One of Detroit’s many grand houses, now a condemned ruin that you can probably buy for a dollar, which may not be a very sound investment. 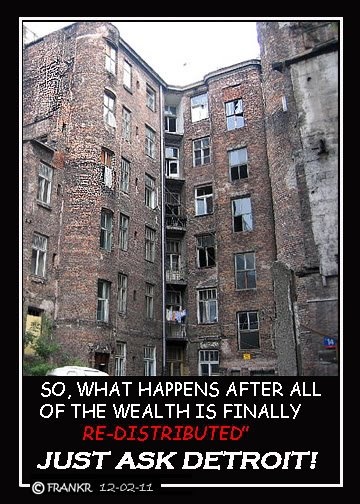 So, exactly why should We the People make Mexican citizens prosperous at the expense of American citizens? Can someone, somewhere answer that?

It all boils down to a single sentence in an article I wrote a few years ago, long before Donald Trump was on the presidential scene – “The most valuable thing in the history of the world is the American consumer market, and We the People are giving it away for free.” Voluntarily!

We don’t have to do that. We are in the driver’s seat. Mexico knows it, China knows it, Japan knows it, the world knows it. We finally have a leader (Donald Trump) who also knows it and is NOT STUPID, unlike American presidents for the past two decades! Link to that article…. Time to Stop Being Stupid!

Ford Motor Co’s (F.N) abrupt move to scrap a planned $1.6 billion car plant in central Mexico has spooked a network of suppliers who bet on a growing customer base and dramatized the risk that Donald Trump’s agenda poses to the country’s broader economy.

Many auto parts makers had started to expand in anticipation of Ford’s plant in the state of San Luis Potosi, where industry is “easily 70 percent” dependent on the auto sector, said Julian Eaves, managing director of Preferred Compounding de Mexico, a U.S.-owned maker of rubber compounds operating here.

“It’s going to have a huge impact on the local community,” said Eaves.

The loss to the economy, Eaves calculates, could run into the hundreds of millions of dollars, and maybe even into the billions, over the next five years, as manufacturing, contracting and indirect jobs all fall short of plans. Officials say they are still analyzing the economic impact of the Ford decision.

The hemorrhaging may be just the beginning of Mexico’s pain from Trump’s vows to shake up trade and bring manufacturing jobs back north when he takes office on Jan. 20.

Ford ascribed its move to a decline in North American demand for small cars like the ones it planned to make in San Luis Potosi. But Trump had been lambasting Ford for its Mexico operations, months before he was elected president in November.

Trump upped the ante on Thursday, threatening to slap a “border tax” on Japanese automaker Toyota Motor Corp (7203.T) for cars it sells to the United States from a new plant in Mexico, fueling fears of an all-out offensive by his government on Mexican industry.

Mexico’s government on Friday “categorically” rejected any attempt to use threats to influence investment decisions in Mexico, saying it wanted to boost the competitiveness of North America. It did not mention Trump or Toyota in its brief statement.

In a matter of days, Ford’s retreat has turned the factory site into a barren plain bereft of its economic promise.

“It now looks like a cemetery,” said Fernando Rosales, 28, a hydraulic hoses contractor preparing to abandon the site. “(There is) only death here, we are all leaving.”

Not far from the doomed Ford site, other major players from the global automotive industry are in the midst of multi-million dollar investments, including General Motors Co (GM.N), which Trump has also repeatedly berated for investing in Mexico.

The U.S. president-elect’s broadsides against Mexico have shown how exposed companies in the supply chain are to the whims of U.S. automakers under pressure not to offshore production.

Shares in Kansas City Southern (KSU.N), one of the main railroad operators in Mexico, fell following news of the Ford cancellation and have lost 3.3 percent since Tuesday morning.

“This was going to catapult us,” Gustavo Puente, the state economy minister of San Luis Potosi, said of the plant Ford originally announced in April of last year. Ford told him the plan was off about an hour before it went public with the news, he said.

Around 12 to 14 of the suppliers had already invested money buying land or signed a contract with developers, said Resendez of Colliers, though Puente suggested the number was fewer.

“It’s a very, very complicated hole,” Resendez said. “The suppliers, depending on their level of advancement, will lose money. They had already made big investments.”

‘KICK IN THE TEETH’

At the Ford premises, shocked and dejected workers packed up construction materials and prepared to leave.

“This is a massive kick in the teeth,” Rosalio Rocha, 52, a construction worker on the site from a nearby town said.

“It looks like he is going to keep going on about it,” he added, referring to Trump.

Some of the ground at the 280-hectare site had already been leveled and the skeletons of two large, white buildings stood out against a rusty brown and green backdrop.

Workers said they had heard plans for an industrial park opposite the site for suppliers had also been suspended. The park’s developers were not immediately available to comment.

The auto sector is at the heart of a Mexican industrial boom since the 1994 North American Free Trade Agreement (NAFTA) between it, the United States and Canada, a deal Trump has threatened to renegotiate in favor of the United States or scrap entirely.

About half of the foreign direct investment (FDI) to Mexico since the start of the century has come from the United States, where it sends around 80 percent of its goods exports.

Carmaking is no exception.

Some Mexican states have come to depend on autos almost entirely for growth. In San Luis Potosi, 15,000-17,000 new direct jobs are expected to be created in 2017, all in the auto sector, according to federal labor delegate Edgar Duron. The total does not include the Ford plant, which had been expected to create thousands of additional jobs in coming years.

The San Luis Potosi state government had already paid part of the 1 billion pesos ($47 million) it owed under a contract to support the Ford plant, Puente said, without specifying how much. The federal government said Ford would reimburse the sum.

Projects, both private and public, are underway to spend hundreds of millions of pesos to expand the city’s airport and build a new bus line in expectation of a busier future.

But the real fear in Mexico is that, as Trump himself tweeted after the Ford decision, “This is just the beginning.”