There is little question that Broward Sheriff Scott Israel screwed up the Parkland high school shooting response. Unbelievably, four of his deputies sat outside the school while Nikolas Cruz was roaming the halls and classrooms inside the building slaughtering students. It is impossible that those deputies could not hear Cruz’s gunshots and the screams of the students inside.

Thus, I see no way that those deputies failed to enter the building and engage the shooter unless told to do so. THAT decision, for whatever reason, must be borne solely by Sheriff Israel, who, cowardly, is attempting to place the blame for no response on the school resource officer, who is also one of his deputies and who was among the four deputies to sit outside the building during the massacre.

County policy may have been Israel’s guiding motive in the inaction of his department to the crisis, but it was Israel alone who apparently made the decision to prevent his officers from engaging the killer. There is NO excuse for that. If such an order was given by Israel, the four deputies should have disobeyed and entered the building on their own.

Now, 74 Florida legislators have sent a letter to Governor Rick Scott asking that he fire Israel. I can see possible criminal charges resulting from Israel’s inaction.

Nearly every Republican member of the Florida House of Representatives is calling on Gov. Rick Scott (R) to suspend a county sheriff over his office’s response to a deadly mass shooting at a local high school earlier this month, according to Huffington Post.

Florida House Speaker Richard Corcoran (R) tweeted a letter he sent to Scott on Sunday, urging him to suspend Broward County Sheriff Scott Israel for “incompetence and dereliction of duty.”

In the four-page letter, 74 out of Florida’s 76 state House representatives accused Israel of failing to take significant action to prevent the Feb. 14 massacre at Marjory Stoneman Douglas High School in Parkland, Florida, in which a 19-year-old suspected gunman confessed to killing 17 people using an assault-style rifle.

“In the years leading up to this unspeakable tragedy, Sheriff Israel, his deputies, and staff ignored repeated warning signs about the violent, erratic, threatening and antisocial behavior of Nikolas Jacob Cruz,” the legislators wrote, referencing the suspected gunman.

Today I sent the following letter to @FLGovScott Asking that he suspend Broward County Sheriff Scott Israel for incompetence and dereliction of duty. I was honored to be joined by 73 Republican colleagues. You can read the letter attached here. pic.twitter.com/exZVwGQ3DR

Florida House Rep. Bill Hager (R), who signed the lawmakers’ shared plea, also sent his own letter to Scott on Saturday to demand Israel’s ouster. Hager pointed to reports that Israel’s office received at least 18 phone calls between 2008 and 2017 from community members concerned about Cruz’s behavior.

In 2016, multiple people told the sheriff’s office they worried about Cruz’s cache of weapons, according to The Naples Daily News. One caller told a deputy he believed Cruz “could be a school shooter in the making,” the news outlets reported.

The sheriff’s office has also been slammed following reports that at least four deputies, including the high school’s armed resource officer, opted not to enter the building after responding to the shooting. The sheriff’s office announced Thursday that the agency was conducting an internal investigation into the deputies’ actions.

Israel defended himself during a heated interview Sunday with CNN’s Jake Tapper, adding that he had no plans to resign.

“I can only take responsibility for what I knew about,” Israel told Tapper. “I exercised my due diligence. I’ve given amazing leadership to this agency.”

Israel has been outspoken in his criticism of Florida lawmakers ― many of whom are Republican ― who refuse to push for stricter gun laws.

“If you’re an elected official, and you want to keep things the way they are ― if you want to keep gun laws as they are now ― you will not get re-elected in Broward County,” Israel said earlier this month at a vigil to honor the Parkland victims.

A representative for the Broward County Sheriff’s Office did not immediately respond to HuffPost’s request for comment.

The Florida Department of Law Enforcement (FDLE) announced Sunday that Scott had directed the agency to “investigate the law enforcement response” to the Parkland shooting.

The sheriff’s office “will fully cooperate with FDLE, as we believe in full transparency and accountability,” Israel said in a statement Sunday. “This independent, outside review will ensure public confidence in the findings.” 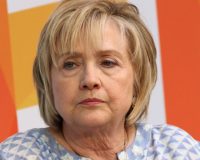 Hillary Says You Can ‘Get Your Life Back’ After You’re Vaccinated
May 17th, 2021 Flag And Cross