Brexit hero Nigel Farage appeared with Donald Trump in Jackson, Mississippi last night. “I wouldn’t vote for Hillary Clinton if she paid me!” 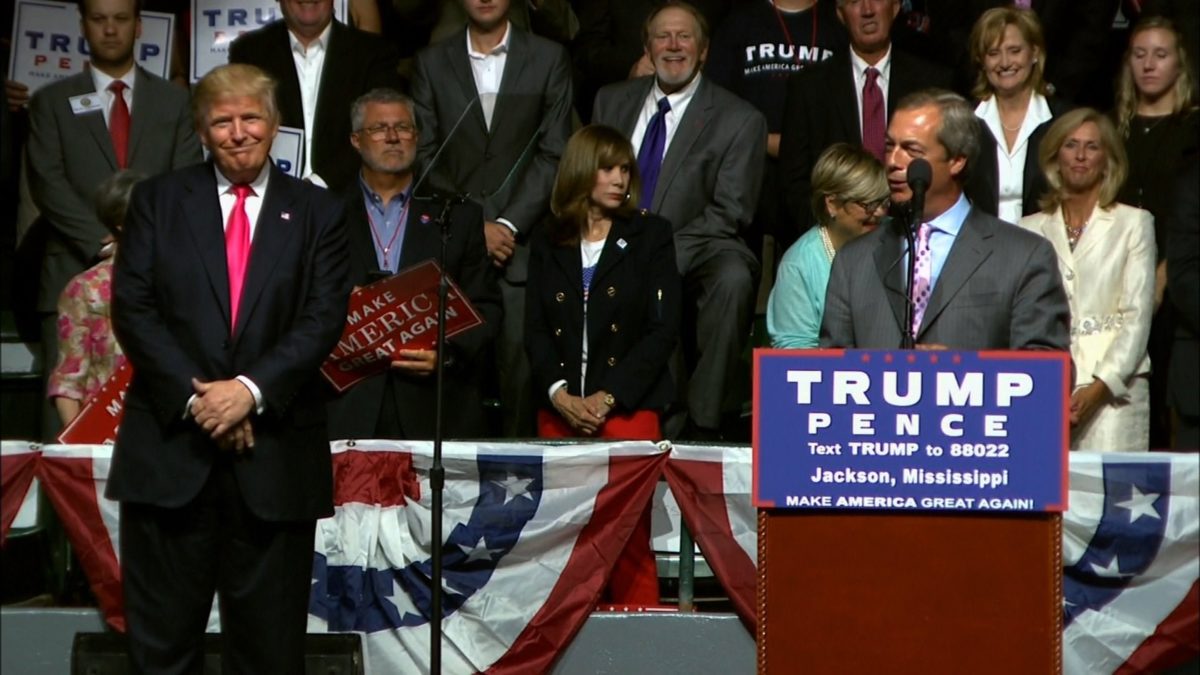 Nigel Farage, the former leader of the UK Independence Party and a chief proponent of the British exit from the European Union earlier this summer, joined Trump on stage at a rally to draw similarities between the UK’s vote to leave the European Union and Trump’s insurgent campaign.

Appearing with Donald Trump at a Jackson, Mississippi rally, Nigel Farage, the hero of Brexit, endeared the crowd of 15,000 Wednesday night with the same anti-establishment populist language The Donald is famous for.

Nigel Farage, former leader of Great Britain’s UK Independence Party (UKIP) and the figurehead of the “Brexit” movement’s upset victory, appeared at a Donald Trump campaign rally in Jackson, Mississippi Wednesday night, encouraging the crowd to fight the American political establishment like the people of Britain did just months ago.

“If the little people, if the real people, if the ordinary, decent people are prepared to stand up and fight for what they believe in, we can overcome the big banks, we can overcome the multinationals,” Farage told the audience after an introduction from Trump. He recounted how polls, financial agencies, and the majority of European institutions predicted Brexit’s failure even on the day of the country’s referendum on European Union membership.

Farage recalled that ordinary people in the UK reacted poorly when U.S. President Barack Obama came to their country and participated in “Project Fear,” telling them not to vote “Exit.” He said that as a foreign citizen, he would commit the same sin by telling Americans how they should vote. However, he quipped, “If I were an American citizen, I wouldn’t vote for Hillary Clinton if you paid me — in fact, I wouldn’t vote for Hillary Clinton if she paid me.”

At the end of his brief remarks, Farage encouraged the rally attendees, declaring, “Anything is possible if enough decent people are prepared to stand up against the establishment.”

Outgoing UKIP leader Nigel Farage has appeared alongside Donald Trump to give a speech at a rally in Mississippi. He spoke about his role in the successful campaign to leave the European Union, and said if he was a US citizen he would not vote for Hillary Clinton.

Farage spearheaded the successful movement to have the United Kingdom leave the European Union last month, during which time he expressed approval for Trump’s approaches to immigration and anti-globalism.