So, what’s the deal with this guy? Was he trying to start a race war, posting a terroristic threat that would be seen as a case of racist hate by a white poster? Or was he just bored and looking for some fun? Or did he actually plan to go out and kill as many black people as he could?

Emmanuel D. Bowden, who bears a striking resemblance to Buckwheat, is a black college student who was living on the campus of Saginaw Valley State University in Saginaw, Michigan.

He is now living in the local jail, charged with terroristic threatening. He is also awaiting trial on an unrelated credit card case. On the felony terrorism charge he is facing a maximum penalty of 20 years in prison. 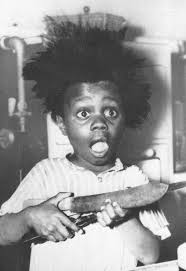 The message triggered an investigation and police security response that led to the arrest of a Delta College student living in SVSU housing.

Emmanuel D. Bowden, 21, is charged with making a false report or threat of terrorism, a felony that carries a maximum penalty of 20 years in prison.

The police reports state that, after the post received multiple “negative replies,” the original poster replied with four additional messages that read, “Its [sic] a joke,” “I’m black,” “I was going to give it an hour to see how you all would react,” and “Right. I could be angry and just expressing myself lol.”

University police and the FBI investigated the post, and police sometime before 9:30 a.m. arrested Bowden inside a residence hall on SVSU’s campus in Kochville Township on an unrelated warrant. While inside the residence hall, police called Bowden’s cellphone to confirm his phone was the one they believe was used to post the threat, the reports state.

University spokesman J.J. Boehm has said Bowden, a Canton resident, is a full-time Delta College student who was living on SVSU’s campus. SVSU has 13 students from Delta living on campus this year, Boehm said.

The Saginaw News obtained the police reports through a Freedom of Information Act request that SVSU granted “in the public interest of providing accurate information regarding this matter,” Boehm said.

“This should not, in any way, be construed as an action on the part of the Saginaw County prosecutor’s office, nor should be viewed as any implication of the defendant’s guilt,” Boehm said. “Like all defendants, the suspect in this case remains innocent until proven guilty.”

Bowden’s arrest warrant alleges he “did threaten to commit an act of terrorism and did communicate that threat to another person.”

The language from Bowden’s warrant comes from the statute related to the false report charge. The statute also states, “It is not a defense to a prosecution under this section that the defendant did not have the intent or capability of committing the act of terrorism.”