Unbelievable! CNN is reporting that “sources” have told them that Hitlery is going to walk. I suggest having an escape plan in place if that is true and she is elected

According to Mediaite, “sources that are familiar with the FBI’s investigation into Hillary Clinton‘s use of a private email server, the former Secretary of State is not expected to face charges in the probe.

This, according to CNN’s Senior Producer Edward Mejia Davis, who took to Twitter shortly ago to indicate the likely announcement of ‘no charges'”:

Sources tell CNN's Evan Perez: expectation is that there will be announcement of no charges in Clinton email probe w/in next two weeks or so

This stinks to High Heaven! Here are a few questions to consider:

None of the answers to these questions can be comfortable if you are a believer in the American rule of law and justice for ALL, even the entitled elite.

Not everyone in the media is voluntarily swallowing CNN’s story. Hugh Hewitt tweeted his skepticism….

3. 18 USC 1001 was violated. Time will tell. I'm just skeptical of any source telling people all is clear for https://t.co/C3jw6lcdZJ

Call me a hopeless optimist, but is it not possible that the powers that be on the right are delaying prosecution at this point because they know that with the current administration in office they will never get a conviction, and if Mr. Trump wins the election, then the investigation can resume or be brought anew without the interference of the corrupt leftists, and/or the potential complications and accusations of double jeopardy?

If this is not the case, and CNN is possibly privy to high-profile, ongoing federal investigations, or if the FBI is intentionally leaking sensitive information to the press to run the idea up the flagpole to see who salutes and who grabs the pitchforks and torches, if it is entirely possible for ANYONE in this country to so willfully and carelessly violate federal law, putting every American in danger, and do this hundreds, if not thousands, of times, then we are doomed, we have passed the point of no return. No matter what Hitlery does, she gets away with it. Her new campaign manager explains….

My suggestion to everyone would be to wait until Election Day. If Donald Trump wins it will be a whole new ballgame, this time favoring We the People instead the They the Entitled. If The Donald is not elected we will, without question, see more of the same corruption, slippery slope socialism, and elitism, heaped on the backs of Mom and Pop America. And in that case, I would suggest finding another country to call home. Ours will have been lost.

I recommend this to anyone of any age, but especially young Americans with children. If “Sources” are correct and the Wicked Witch of Benghazi walks, then you will not want your children to be a part of what is to come in the United States.

I am a subscriber to International Living magazine, and have been for years, for this very reason. I simply don’t recognize the country anymore whose Constitution I served in uniform to support and defend.

I have had high hopes for Donald Trump’s “America First,” and am still praying for that second coming of Ronald Reagan. If it doesn’t happen, I will be executing Plan B and my wife and I will be moving on to another locale.

Of course, as Texans, there is a Plan C. If the growing Texas Nationalist Movement (secession) bears fruit, that could change the game also. Texas is a vibrant, booming, prosperous state. If it becomes an independent nation again, and I certainly welcome that, then we will proudly and gladly remain and continue to contribute to our new country.

There are many other good options relatively close to the US, especially in Latin America. From Mexico to Argentina there are liberty-loving, warm and friendly people where the cost of living is very low. A retired couple can live VERY comfortably on the Social Security they have paid into and are owed, instead of practically starving to death at the poverty level in the US.

I’m not suggesting you give up all hope. I’m suggesting that you develop a Plan B, and be ready to execute should the unthinkable happen. 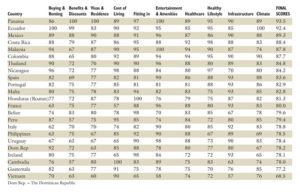