BOOM! Consumer confidence, the stock market, and the entire US economy is skyrocketing since Donald Trump’s election

Since the election of Donald Trump as President of the United States, consumer confidence has skyrocketed. This is, no doubt, in response to Trump’s America First economic policy.

I have long believed that the American worker has been given the short end of the stick by previous presidents whose economic policies have been to the great benefit of foreign countries like China and Mexico, to hell with the American people. 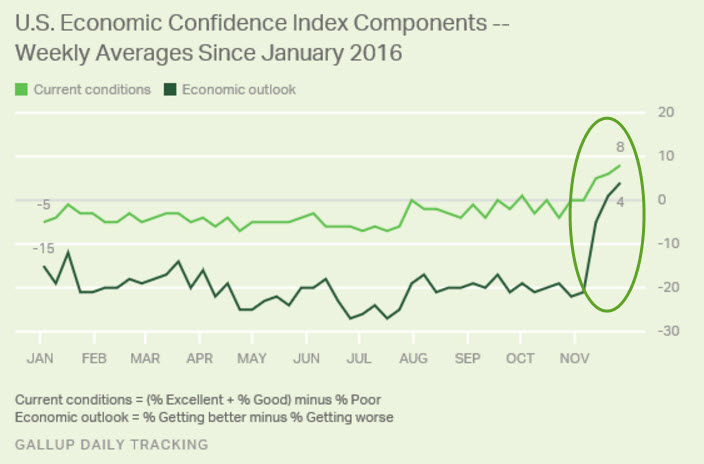 Consumer confidence surged in early December, reports the Washington Examiner, thanks to expectations that President-elect Trump’s policies will boost the economy, according to a preliminary release of the University of Michigan consumer sentiment index Friday.

The index rose to just below the post-crisis high reached in 2015, which in turn was the highest since 2004, well before the financial crisis. The improvement “was largely due to consumers’ initial reactions to Trump’s surprise victory,” said Richard Curtin, the chief economist for the survey.

When asked what news about the economy they had heard, more respondents mentioned the positive impact of new economic policies than recorded ever before.

Stay abreast of the latest developments from nation’s capital and beyond with curated News Alerts from the Washington Examiner news desk and delivered to your inbox.

Those promises have raised the public’s expectations for his presidency, it appears. Curtin warned that he has elevated the risk of letting down consumers. “President-elect Trump must provide early evidence of positive economic growth as well as act to keep positive consumer expectations aligned with performance,” he said.

Of note, the only groups not to see a surge in optimism were college graduates and residents of the Northeast.