Disturbing video, but not graphic. Tragic, racially-movitated double murder in Virginia is filmed by the killer and broadcast on live TV

Photo, above: From the gunman’s vantage point, just before opening fire. Reporter Alison Parker, 24 (pictured above), died at the scene after being shot on live television, along with cameraman Adam Ward, 27. Ward’s fiancee, a producer at the news channel, was believed to be watching from the control room as the killing happened

A disgruntled and deranged gunman coldly murdered two of his former co-workers, citing racial and sexual (he was gay) discrimination, charges that had been investigated and for which there was no evidence found. The killer, Vester Lee Flanagan, went by the on-air name of Bryce Williams.

Warning: The following video is not graphic, but it is disturbing, showing the gunman filming his mass murder. The killer then fled the scene and was cornered by police three hours later before killing himself. He claimed the double murder was in retaliation for the Charleston tragedy a few months ago.

A man who was fired from his job as a television reporter two years ago took revenge against the small-town Virginia news station by executing two of his former coworkers on live television, and then posting disturbing first-person video of the attack on social media.

Viewers of WDBJ, a CBS affiliate in Moneta, Virginia, watched in horror this morning as Vester Lee Flanagan II, 41, shot dead 24-year-old reporter Alison Parker and cameraman Adam Ward, 27, on live TV as the two were filming a light-hearted segment at 6:45am.

After carrying out the shocking on-air execution, Ward fled and posted video of the attack on social media while also writing about his grudges against the two young journalists in a Twitter rant.

He also faxed a 23-page manifesto-cum-suicide note to a national news station outlining his motives for the attack, saying he bought the handgun he used following the Charleston Church killings, adding: ‘my hollow point bullets have the victims’ initials on them’.

Five hours later, police cornered Flanagan a three hours drive northeast in Fauquier County, Virginia where he shot himself in an attempt to commit suicide. Flanagan initially survived the gunshot wound, but died not long after at approximately 1:30pm 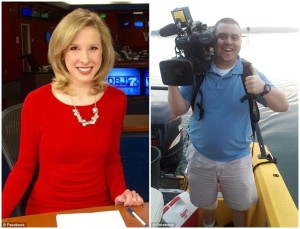 Both Parker, 24 (left), and Ward, 27 (right), died at the scene. Parker was dating fellow WDBJ reporter Christ Hurst, 28, and the pair had just moved in together, while Ward was engaged to WDBJ news producer Melissa Ott 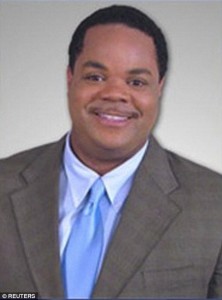 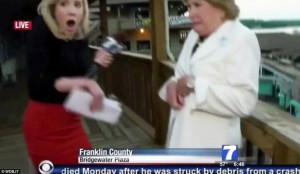 While Flanagan was recording the video on his own camera, the shooting was being played out on live TV. Above, a grab of this morning’s WDBJ newscast with Parker on the left and Vicki Gardner on the right. Gardner was being interviewed by Parker at the time and suffered a bullet wound to the back. She is now in stable condition after undergoing emergency surgery 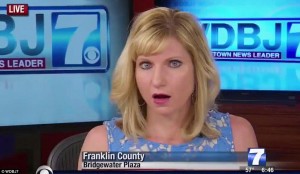