H/T Joe LaVeque
The day after the first presidential debate the mainstream media, aka the official Democrat Party Communications Division, was all abuzz trying to convince you and I that this race was over, Trump tanked, and Hitlery won. Yet, the following day 27,000 screaming Trump fans came to see The Donald in Melbourne, Florida, only 15,000 of which could fit into the venue, leaving 12,000 outside.

For the months of August and September Donald Trump drew 312,000 fans to his rallies, and that is just the number that were in the respective venues. Many thousands more were not able to get into those venues due to capacity. Hitlery drew 12,000 in the same amount of time, averaging an anemic 671 attendees per event, and many of those were high school students forced to watch the Wicked Witch in the school gym.

Check out this crowd in Melbourne, Florida the day after the debate that the lamestream media tried to convince us Trump had lost and Hitlery was on her way to the White House, the election being over. Be sure to watch the video, below, of The Donald being greeted by 27,000 screaming fans. The atmosphere is absolutely electric, much like a rock concert. 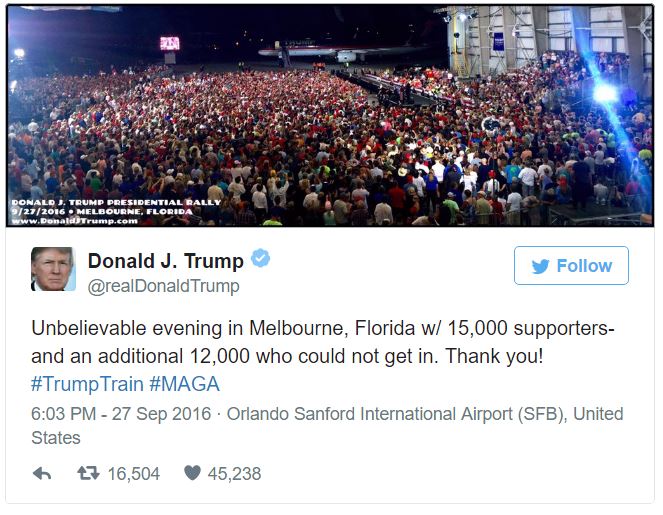 Take a walk in Florida with @realDonaldTrump @TeamTrump– as we walk from the plane to a massive hangar rally. #TrumpTrain #MAGA pic.twitter.com/finwjAQAHu