Donald Trump makes shocking revelation: “I am Batman!” I can’t wait to see the abuse the media hurls at The Donald over this

As promised, 2016 presidential candidate Donald Trump made quite the impression on dozens of youngsters at the Iowa State Fair in Des Moines Saturday, when he gave them free rides in his million-dollar Sikorsky helicopter. 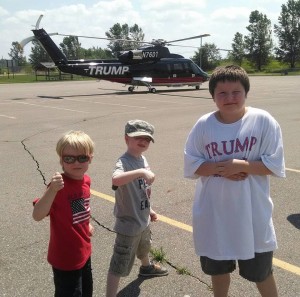 Some of the lucky children even had the chance to fly up to 10,000 feet with the Donald himself

Among the chosen few who went up in the helicopter with Trump were William, Sean and Brendan Bowman.

CNN reports that their parents, David and Sarah, are uncommitted Republican caucus-goers who wanted to make sure their young boys didn’t miss out on the opportunity of a lifetime.

During the flight, 9-year-old William used his GoPro camera to document the entire experience. At one point, he pointed the camera directly at the presidential candidate and asked him point blank, “Mr. Trump, are you Batman?”

To which the businessman replied, “I am Batman.”

The video later ended up on Facebook, but only to friends of the couple.

So many happy kids in Iowa, who will remember this day for the rest of their lives – thanks to @realDonaldTrump. pic.twitter.com/jdqFxMFPvv