Anne Patterson for Undersecretary of Defense for Policy, the #4 position (top civilian) in the Pentagon? Really? Is Mattis on dog food (apropos considering his nickname)?

Not only does Anne Patterson possess ZERO defense experience, she is a whisker from being on the terrorist watch list. In fact, liberty-loving Egyptians believe she IS a terrorist! (photo,above)

Patterson was Barack Hussein’s Ambassador to Egypt, a clever phrase for a stooge conduit between Egyptian President Mohammed Morsi’s Muslim Brotherhood, to which Morsi owed his true allegiance, and tons of American cash and arms that were flowing into Morsi’s open arms in the name of supporting an ally, Egypt, but instead the support was going to Morsi and the Muslim Brotherhood.

I know Mattis is used to being top dog (OK, last dog reference, I swear), but he is at best making himself appear incompetent with this choice, and I might add he is serving at the pleasure of a man who is not a big fan of incompetence and has no problem offering his two most famous words when and where he finds it…. “YOU’RE FIRED!”

Hey, Jim, why not nominate Khalid Sheikh Mohammed? I hear he has a lot of time on his hands, so to speak.

My advice to President Trump would be to pull rank and fill those positions himself. If Mattis balks, tell him it has been real and refill his position. Among the most critical responsibilities of a leader is putting the right people in the right positions. Mattis knows this and so does his boss. 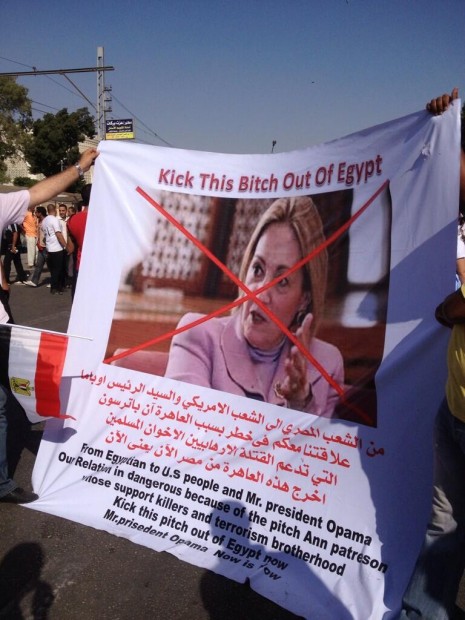 From Politico
Secretary of Defense Jim Mattis wants to tap the former U.S. ambassador to Egypt, Anne Patterson, as his undersecretary of defense for policy, but the Pentagon chief is running into resistance from White House officials, according to multiple sources familiar with the situation.

If nominated and confirmed, Patterson would hold the fourth most powerful position at the Pentagon – and would effectively be the top civilian in the Defense Department, since both Mattis and his deputy, Robert Work, were military officers.

As ambassador to Egypt between 2011 and 2013, Patterson worked closely with former Egyptian President Mohammed Morsi and his Islamist government. She came under fire for cultivating too close a relationship with the regime and for discouraging protests against it—and White House officials are voicing concerns about those decisions now.

The skirmish surrounding Patterson’s nomination is the latest in a series of personnel battles that have played out between Mattis and the White House, with each side rejecting the names offered up by the other while the Pentagon remains empty. The White House has yet to nominate a single undersecretary or deputy secretary to the Defense Department, while Work, Mattis’s deputy, is an Obama administration holdover who only agreed to stay on until the secretary taps a deputy of his own.