What has two thumbs and always gets the last laugh? THIS GUY! As Fox does all it can to derail the Trump Train, The Donald only gets stronger

As the post-debate dust settles, it has become increasingly clear that Fox News went into the debate with an agenda – KILL TRUMP! The loaded gotcha questions from the moderating team, especially Megyn Kelly and Chris Wallace, and in particular Megyn Kelly, were designed to embarrass and humiliate, not inform and educate. Move over, MSNBC. You have competition in the gutter-trash-as-objective-news department.

I haven’t watched Fox News since shortly after the debate, and refuse to forever. The last thing I recall was Charles “Nazi” Krauthammer, who looks and sounds more like an SS officer than a political pundit, crowing gleefully at the what he apparently and erroneously (again!) believed was The Donald’s funeral. At one point so great was Krauthammer’s orgasmic rapture that I fully expected him to jump from his chair and dance the lederhosen.

Certainly the moderators’ questions were reviewed and approved by the editors and upper management at Fox well prior to the debate. So, while Megyn Kelly may be the president of the Trump Hate Club, it is apparent that the entire Fox family is on board. They have made their personal/collective agenda and unprofessionalism crystal clear. May they go down in the flames of a million ratings drops. Fair and balanced, my ass! 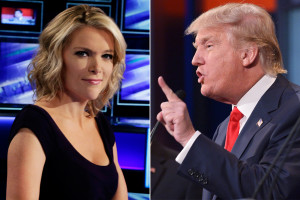 A few hours before Thursday’s Fox News debate, a friend of Donald Trump’s confided to me that Trump was nervous. Not about the competition — he could handle them. No, Trump worried about Fox News, and in particular, debate moderator Megyn Kelly. She’d been hammering him all week on her show, and he was certain she was out to get him.

He had canceled a Fox News appearance on Monday night, the friend said, in order to avoid her. (Trump’s spokeswoman wouldn’t confirm or deny this.)

It turns out Trump was right. His toughest opponents Thursday night weren’t the candidates up on stage, but the Fox News moderators, who went right after him — none with more gusto than Kelly.

Kelly, the whip-smart queen of Fox News’ blonde stunners, went straight for the jugular. “You’ve called women you don’t like fat pigs, dogs, slobs and disgusting animals,” she admonished Trump. “Does that sound to you like the temperament of a man we should elect as president?”

But Trump saw her coming a mile away and cut her off. “Only Rosie O’Donnell,” he barked, drawing cheers from the crowd.

When Kelly tried to point out that he had insulted more women than O’Donnell, Trump, as he would all night, steamrolled right past her. “The big problem this country has is being politically correct,” Trump practically shouted, invoking conservatives’ favorite term of disdain. “I’ve been challenged by so many people and I don’t frankly have time for total political correctness and to be honest with you this country doesn’t have time either.” The crowd went wild.

Maybe they were cheering because the question was apropos of something Rachel Maddow would ask, and they were, after all, Republicans. But I think they were cheering because it was clear, at that moment, that Trump was going to be Trump, and wasn’t going to heed the pundits and phonies to tone down his act. According to a report in New York magazine, even his own daughter, Ivanka, was making that case.

As the Republican front-runner, everyone assumed that the big battle shaping up in Republican politics was going to be between Trump and former Florida Gov. Jeb Bush. But judging by Thursday’s raucous, electric debate, Trump may have sensed his true opponent before anyone else had a clue: It’s Fox News.

Throughout the evening, Trump and his inquisitors battled back and forth like gladiators. Both parties emerged as huge winners. Though nearly devoid of substance, it was the most entertaining debate I’ve ever seen.

Trump led the way. His ethos — the blustering bravado and aggression — became the ethos of the whole affair. New Jersey Gov. Chris Christie went bananas on Kentucky Sen. Rand Paul. The crowd was roaring throughout. There was none of the stilted, awkward talk of the junior debate earlier in the evening. Political Twitter was throbbing with joy and satisfaction.

Hurling insults, Trump went after O’Donnell, political reporters, Bowe Bergdahl, China, Mexico, Japan, money lenders, and practically everyone in Washington. “Our leaders are stupid,” he said, “Our politicians are stupid.” He did stop short of calling Mexicans “rapists,” but not by much. “We need to build a wall, and it has to be built quickly,” he said. “We need to keep illegals out.”

While the moderators went after Trump, the candidates mostly shied away from him. In fact, consciously or otherwise, several echoed his points and nearly everyone tried to match his energy. Some even seemed to genuflect. “Donald Trump is hitting a nerve in this country,” Ohio Gov. John Kasich said at one point. “Mr. Trump is touching a nerve because people want to see a wall being built.”

Only Paul mustered the nerve to launch a pair of (pretty weak) direct attacks. He might have regretted it. Trump dispatched him with a single, withering aside (“You’re having a hard time tonight”) that was all the more effective because it was true.

Trump’s Fox News antagonists had their moments, too. When moderator Chris Wallace invoked the four bankruptcies his companies have suffered, Trump, seeming genuinely angry, repeatedly fell back on an oddly phrased legalism: “I have used the laws of this country just like the greatest people you read about in the business section,” he said.

But it was Kelly who inflicted the deepest cut by rattling off the liberal positions Trump once held and stopping him cold with the question: “When did you actually become a Republican?” Trump’s bluster escaped him. He stammered nervously and seemed lost. “I’ve evolved on many issues over the years, and do you know who else has? Ronald Reagan,” he said feebly. “Very much evolved.” That’s as un-Trump-like a phrase as I’ve heard from him, something more befitting 2012 nominee Mitt Romney.

What’s more interesting than any Trump question or answer, though, was the larger dynamic at play. If Fox News has really turned on Trump, it will add a fascinating new twist to the race.

Right now, Trump is the dominant candidate in the field because he has exerted a broad appeal to every part of the Republican Party. How might those Republicans react to Fox News — their own network! — aggressively trying to take down their favorite candidate?

To find out, I called Janet Roberts, 69, a nurse in Bellville, Ohio, who participated in last week’s Bloomberg Politics poll and supported Trump (“He has the balls to stand up to the career politicians”). She had agreed to give me her reaction immediately after the debate.

When I called, Roberts was furious. “I had more emotion about Fox News tonight than I did about Donald Trump,” she told me. “Those questions were not professional questions. They were bullying. They were set up to purposely make them all look bad. Our country is a mess and I feel like the debate was an example of that. I’m still with Trump.”
Read more….