Smarter than he looks. Dennis Rodman endorses Trump: “We don’t need another politician, we need a businessman like Mr. Trump!”

When you are attracting all demographic sectors of the American electorate, from white-collar conservatives to inner-city cult heroes like Dennis Rodman, you got it happening as a presidential candidate!

Former NBA star Dennis Rodman, ever the controversial showman, has endorsed Donald Trump for President. In an exchange of tweets, Rodman declared his support for The Donald, who responded with grace and gratitude.

Donald Trump has done more to unite America in the past week than Barack Hussein has done in his entire life!

@realDonaldTrump has been a great friend for many years. We don't need another politician, we need a businessman like Mr. Trump! Trump 2016 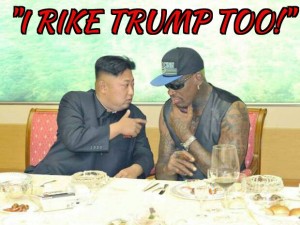