VIDEO: Debra is Messing her panties over Donald Trump’s election, and attacking her former friends who voted for The Donald

Debra Messing? Who the hell is that? I hear that she played on a TV program called Will and Grace, which I have heard of, but never seen because I don’t watch TV at all. Once in a while a football or basketball game, but that’s it. I stopped watching television on August 6, 2015 when Megyn Kelly showed her ass and her bias on national TV at the first GOP presidential debate.

I’m not at all sure what Debra is Messing, and it may be a bit presumptuous of me, but I’m guessing its her panties, judging by her clear hatred for Donald Trump, which she has documented for the world to see in her whinefest, below, that she posted to her facebook page, displaying the tolerance and understanding liberal waste products are famous for…. NOT! 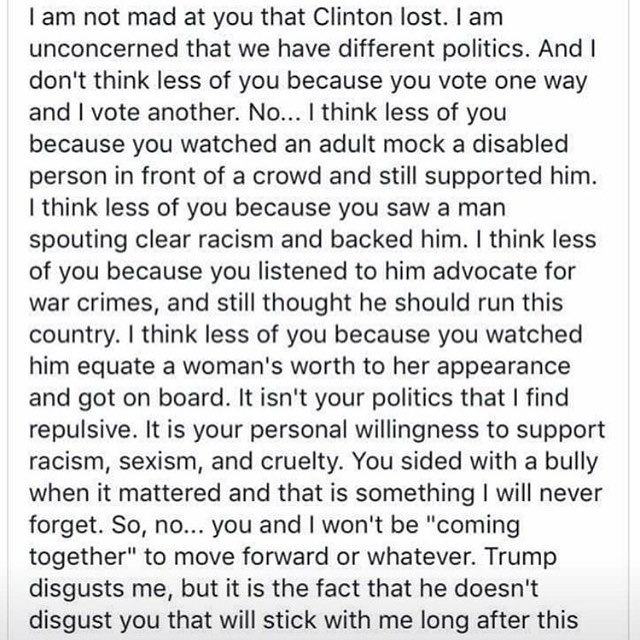 Here you go, Debra, let’s address your erroneous and stupid points one by one, shall we?

2. You “saw a man spouting clear racism.” Really? Since you apparently have no ability to be specific, just throw out general accusations, I will presume you are speaking of The Donald pledging to send criminal illegal aliens back from whence they came and build a wall to keep future illegals out of our country. That is not racism, Debra. That is law enforcement. It is immigration control, which any national leader who desires a free and prosperous society for his or her citizens must enforce.

Case in point: Sweden, the liberal weenie leaders of which have opened their borders to unlimited Muslim immigration and have turned their once peaceful and prosperous country into a welfare state hellhole and the rape capital of the world. “Racism,” my ass!

3. Donald Trump is an “advocate for war crimes?” That is hilarious! Again, you specify NOTHING! Just an erroneous blanket claim, and again I have to presume your meaning, which in this case, I believe is water boarding, which is not only NOT a crime, but has saved many American lives. Our own special operations troops go through water boarding during their training. Personally, I am in favor of a quick trial for scumbags who saw the heads off of Jews (being Jewish yourself, I find it hard to believe that you would disagree), and whether those scumbags spend the rest of their miserable lives at Gitmo or are reunited with Allah expediently, I don’t care a bit. Water boarding them is much gentler treatment than they showed their innocent victims.

Debra, my advice for you is to carefully check the truth and accuracy of the things you post online. If you don’t, you just come off looking like a dumbass. The internet is forever!