Dear Rubio, Walker, Perry, Bush, et al – Based upon your shameless feeding frenzy of Donald Trump, I will NEVER vote for you!

Let me get this straight. John McCain attacks Donald Trump, calling his supporters “crazies,” Trump responds, defending his followers and himself, and you believe this is cause to feast on what you believe to be the dying carcass of Donald Trump. You understand, of course, this makes you characterless scumbags. If any of you are the eventual Republican candidate, I will NOT vote for you. I will write in Donald Trump.

There are two things you certainly should have considered before joining the feast:

1. Trump does not go down so easily. If you know anything about his history then you should know this. I can only presume you don’t, since you have embarked on this tactic of poking a lion in the eye, which, frankly, makes you all at least appear stupid and your mob mentality deplorable. Above all things, Trump loves to fight…. and win! You have just painted big red bullseyes on your empty suits.

2. Did you ever take even a few seconds to consider that perhaps Trump is right, that the legend of McCain, the hero, might be bogus, or at least inflated? I have never been a fan of RINO McCain and I think it is about time someone called him out on his frequent attacks on fellow Republicans. Need I remind you that McCain has referred to some of you as “wacko birds?” McCain’s history of screw-ups is as famous as Trump’s history of success. Do a little research! Here, let me help you out. The following article is a detail of the USS Forestal fire, the deadliest fire in the history of the United States Navy, for which one man was responsible for the deaths of 134 fellow sailors. His name is John McCain. This only scratches the surface. You can find more Fun and Games by John McCain at the following link…. HERO MCCAIN? 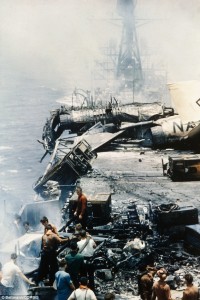 USS Forrestal, July 29, 1967 – The worst accident aboard a US Navy surface vessel since WWII

The Navy released John McCain’s military record after a Freedom of Information Act request from the Associated Press. The record is packed with information on McCain’s medals and commendations but little else. The one thing that the McCain campaign does not want to see released is the record of McCain’s antics on board the USS Forestal in 1967. McCain was personally responsible for the deadliest fire in the history of the US Navy. That catastrophe, with 27 dead and over 100 wounded trumps McCain’s record as a prisoner of war in North Vietnam.

WMR has learned additional details regarding the deadly fire aboard the Navy aircraft carrier, the USS Forrestal, on July 19, 1967 in the Gulf of Tonkin. The additional details point to then-Lt. Commander John McCain playing more of a role in triggering the fire and explosions than previously reported.

On January 16, 2006, WMR reported that according to a US Navy sailor who was aboard the Forrestal on the fateful day of the fire, “McCain and the Forrestal’s skipper, Capt. John K. Beling, were warned about the danger of using M-65 1000-lb. bombs manufactured in 1935, which were deemed too dangerous to use during World War II and, later, on B-52 bombers. The fire from the Zuni missle misfire resulted in the heavy 1000 pound bombs being knocked loose from the pylons of McCain’s A-4 aircraft, which were only designed to hold 500-pound bombs.”

WMR further reported, “The unstable bombs had a 60-second cook-off threshold in a fire situation and this warning was known to both Beling and McCain prior to the disaster.” WMR also cited the potential that McCain’s Navy records were used against him by the neo-cons in control of the Pentagon, “The neo-cons, who have had five years to examine every file within the Department of Defense, have likely accessed documents that could prove embarrassing to McCain, who was on board the USS Forrestal on July 29, 1967, and whose A-4 Skyhawk was struck by an air-toground Zuni missile that had misfired from an F-4 Phantom.”

WMR has been informed that crewmen aboard the Forrestal have provided additional information about the Forrestal incident. It is believed by many crewmen and those who have investigated the case that McCain deliberately “wet-started” his A-4E to shake up the guy in the plane behind his A-4. “Wet-starts”, done either deliberately or accidentally, shoot a large flame from the tail of the aircraft.

In McCain’s case, the “wet-start” apparently “cooked off” and launched the Zuni rocket from the rear F-4 that touched off the explosions and massive fire. The F-4 pilot was reportedly killed in the conflagration. “Wet starting” was apparently a common practice among young “hot-dog” pilots.

McCain was quickly transferred to the USS Oriskany (the only Forrestal crewman to be immediately transferred). Three months later, McCain was shot down over North Vietnam on October 26, 1967.

As WMR previously reported, at the time of the Forrestal disaster, McCain’s father, Admiral John McCain, Jr., was Commander-in-Chief of US Naval Forces Europe (CINCUSNAVEUR) and was busy covering up the details of the deadly and pre-meditated June 8, 1967, Israeli attack on the NSA spy ship, the USS Liberty.

The fact that both McCains were involved in two incidents just weeks apart that resulted in a total death count of 168 on the Forrestal and the Liberty, with an additional injury count of 234 on both ships (with a number of them later dying from their wounds) with an accompanying classified paper trail inside the Pentagon, may be all that was needed to hold a Sword of Damocles over the head of the “family honor”-oriented McCain by the neo-cons.

WMR has also been informed by knowledgeable sources, including an ex-Navy A-4 pilot, the “wet-start game” was a common occurrence. However, it is between “very unlikely” and “impossible” for the Forrestal “wet start” to have been accidental. “Wet starts” were later rendered impossible by automated engine controls.

Wayne Madsen reports on military and political affairs in Washington at his website, WayneMadsenReport.com