Dear Barack Hussein: This is how you protect innocent Americans from armed lunatics. I have a name for it. I call it the Second Amendment

Some Hitleresque agenda aside, I cannot comprehend how any seemingly intelligent adult, including (especially) our elected leaders, can believe that preventing honest citizens access to legal firearms is the answer to stopping insane maniacs from going on bloody killing sprees. How dense do you have to be to not understand the difference between a deranged lunatic and a vetted, sane, emotionally stable and trained civilian? The argument that prohibiting legal firearms from honest citizens will prevent said lunatics from obtaining guns simply does not compute, nor is it historically valid. Illegal firearms are as easy to obtain on America’s streets as tomatoes at a farmer’s market.

There are many, many cases of armed civilians stopping madmen bent on mass murder. Considering the tragic massacre at Emanuel AME Church in Charleston, South Carolina last week, let’s examine only one.

On Sunday, December 9, 2007 Jeanne Assam, a parishioner at New Life Church in Colorado Springs, Colorado, where she also provided volunteer security, came face to face with an insane mass murderer, 24-year old Matthew Murray, who had already killed two and wounded two others at a youth mission in Arvada, Colorado hours before his attempted massacre at New Life.

As the 11AM church service was ending at 10,000-member New Life Church the parking lot was filled with worshippers on their way home. Here Murray went on his second bloody rampage of the day, brutally murdering sisters Stephanie and Rachel Works in the church parking lot, and wounding two others. He was armed with an assault rifle, two handguns, and 1,000 rounds of ammunition as he approached the front doors of New Life Church. Bursting through the front doors of the church in search of more victims, Murray wounded another parishioner before being confronted by Assam, armed with her personal concealed carry 9mm handgun. She dropped Murray on the spot with several shots. Murray then took his own life. End of tragedy.

It is believed that Assam saved hundreds of lives that Sunday in Colorado. How much more horrific would the day have been for the worshippers at New Life had there not been an armed civilian in the building? MUCH more horrific! How many innocent victims from the Charleston massacre would still be with us if only one of the churchgoers had been armed? Maybe all of them.

So, Mr. President, I hope you are reading this. I trust someone in your camp is. I ask that you consider this carefully. Take your time and slowly connect the dots between an armed and trained civilian and a happy, or at least less tragic, ending to an otherwise bloodier rampage by a lunatic. You will never rid the country of lunatics. You will never rid the country of guns. The best you can do is assure that honest, decent Americans are not prohibited from a means to defend themselves. That simply means strict obedience to our Second Amendment. You don’t have to do anything. Just shut up and get out of the way. Our Constitution will take care of the rest. 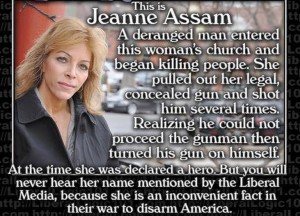 A few seconds after the first rifle blasts outside New Life Church in Colorado Springs, Jeanne Assam hears the screams. The shots continue outside a set of double glass doors in the snowy parking lot where one person is already dead. The noise gets progressively louder. Glass in one of the doors explodes. Then another.

New Life serves more than 10,000 worshipers each week, and thousands of people are leaving the megachurch following Sunday service on December 9, 2007. Now, some of them are dodging bullets. A wave of panicked churchgoers bears down on Assam’s position near the center of the church—a tentlike colossus rising from the 42-acre campus. Assam, in her second month as a volunteer for the church security team, is more than 100 yards from the exploding doors. Between her and the doorway are multiple hallways and classrooms filling with terrified people. “Jeanne!” a security team member yells behind her. “He’s coming through the doors!”

Assam is 42, with blond hair and green eyes hidden behind mascaraed eyelashes. She wears a suit jacket and blue jeans. A cop by trade, Assam has found purpose these past months at this church. Quite literally, she believes it has saved her. She is newly born-again, zealous in her recently discovered faith. On this day, she planned to end a three-day fast and had already read her Bible before coming to work for the 11 a.m. service. Now, looking down the hallway, she pulls out the .9 millimeter Beretta tucked into the front of her jeans and begins sprinting through the crush of people running past her.

There are more blasts at the doors. More people. More screams. Then, suddenly, nothing. The corridor is empty. People take cover in rooms; some are hiding in bathroom stalls. In the distance, Assam sees a man opening one of the doors. He’s holding a weapon. The man moves slowly, deliberately. Assam can only think of one thing: I need to end this right now. She rushes toward a hallway to her right. She stands close to the wall, puts her Beretta at a low-ready position, and prays.

When she was young—a tomboy who preferred games of cowboys and Indians to ballet—Assam built a fort in her backyard. Four walls, no roof. She loved sitting in there. Just her, safe, looking up at the stars. In that fort, it was only her and God.

Matthew Murray, a thin, 24-year-old man, is wearing blue earplugs, a flak jacket, kneepads, black lace-up boots, and a backpack as he walks up the corridor. He’s holding a Bushmaster AR-style rifle. Murray also has two .9 millimeter handguns, and he’s carrying at least 1,000 rounds of ammunition. He fires his weapon down the hallway, again and again. He is the plague who’s come to wipe out those who have sinned against him.

From Assam’s hiding place, the rifle shots are deafening. She can hear the man mumbling between rounds. He fires again. Assam is calm and alert. She wants to shoot the gunman when he passes, but it seems too risky. There’s nowhere to run if he sees her first. God, please be with me, she thinks. Assam steps from behind the wall, gun stretched from her body. Murray is 20 yards away. “Police officer!” she yells. “Drop your weapon!”

The man jerks his rifle toward Assam. She fires five quick shots. Murray falls backward. Assam moves to the middle of the corridor and rushes forward. She’s a few dozen feet from Murray now, exposed in the middle of the hallway. “Drop your weapon, or I will kill you!” she yells. Murray sits up to face her. He’s still holding the rifle. Boom-boom-boom. Bullets rip past her and pepper a wall. While Murray shoots, Assam fires three times.

Through the haze of gun smoke, Assam sees the man struggling on the floor. He props his head against a wall. Her weapon is up, trained on the man. She sees his hands moving near his shoulder. He’s trying to pull the pin on a grenade. He’s going to kill everyone around here, Assam thinks. She instinctively steps back and fires two more shots.