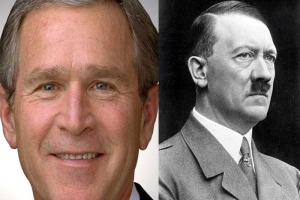 Have you heard about this in the mainstream media?

Yeah, I didn’t think so.

A Washington, DC sixth-grade class at McKinley Tech Middle School was given a homework assignment requiring students to compare former President George W. Bush to Adolph Hitler. One concerned parent, who believed the comparison was “over the line,” complained about the assignment.

Corrective/disciplinary action taken? The teacher has been asked to apologize to the students. “The teacher deeply regrets this mistake, and any suggestion to malign the presidency or make any comparison in this egregious way,” school spokeswoman Melissa Salmanowitz said.

Why hasn’t the mainstream media given the story a hint of coverage? Well, who would expect the mainstream media to complain about young, impressionable skulls being filled with leftist propaganda? After all, the MSM is at the front of the effort to revise history with a decidedly liberal slant. I imagine network and newspaper CEOs and editors reading the assignment and staring at one another with that perpetually-confused gaze they own, shrugging, and begging, “What’s wrong with that?!”

Would the MSM pay attention to this story if it was Barrack Obama being compared to Hitler? No doubt, the wailing and gnashing of teeth from Harvard to Berkeley would be deafening and would dominate the airwaves for weeks. The offending school would be demolished before the next sunrise and replaced by a 100-foot tall statue of  The One. Broadcast attention worthy of 9/11, with somber, near-tearful indignation from network anchors. Flags at half-mast. Hours and hours of prime time air devoted to slamming the vast right-wing conspiracy. A moment of silence at the UN. And in a globally-televised address, dripping with self-pity, Barrack Hussein Obama would implore (with a wink) the rioters to remain calm, to not hate the haters, to behold his divinity.

The text from the homework assignment (below) reads:

“Now that we have read about two men of power who abused their power in various ways, we will compare and contrast them and their actions. Please refer to your texts, ‘Fighting Hitler — A Holocaust Story’ and ‘Bush: Iraq War Justified Despite No WMD’ to compare and contrast former President George W. Bush and Hitler. We will use this in class tomorrow for an activity!” 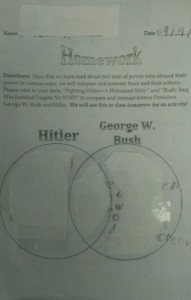