Photo, above: Parachutists jump from C-47 transport planes in Carentan, Normandy, France, Wednesday, June 5, 2019. Approximately 200 parachutists participated in the jump over Normandy on Wednesday, replicating a jump made by U.S. soldiers on June 6, 1944 as a prelude to the seaborne invasions on D-Day. (AP Photo/Rafael Yaghobzadeh)

Exactly 75 years ago, a young paratrooper in the US Army’s 101st Airborne Division, parachuted with 1,300 other American paratroopers near Carentan, France as part of the operation we now know as D-Day.

Rice has been training for this day with a physical trainer for the past six months. Asked how the jump went, Rice replied, “It went perfect, perfect jump. I feel great. I’d go up and do it all again.” 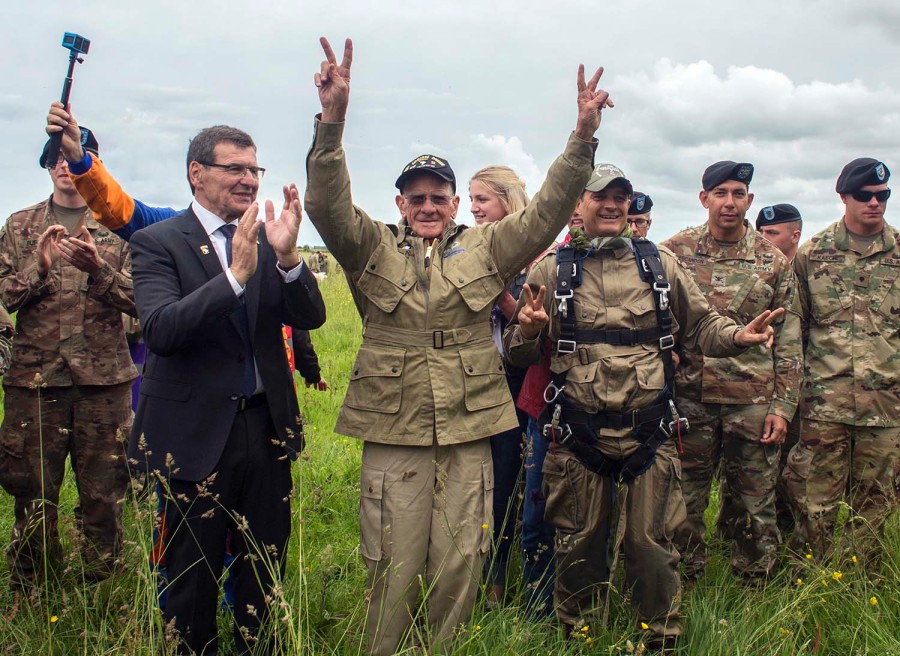 Ninety-seven-year-old D-Day vet Tom Rice after his successful parachute landing in Carentan, France where he took part in a D-Day recreation of the airborne invasion in which he participated 75 years ago with the US Army’s 101st Airborne Division. Photo credit AP

Asked about his jump into the hellish fire of the Germans, Rice described it as “the worst jump I ever had. I got my left armpit caught in the lower left hand corner of the door so I swung out, came back and hit the side of the aircraft, swung out again and came back, and I just tried to straighten my arm out and I got free.”

Tom Rice and those who served and sacrificed with him to liberate Europe from Hitler and his Nazi machine have been referred to as “the greatest generation.”

Indeed. God Bless them all.

97-year-old D-Day veteran Tom Rice honors the 75th anniversary of D-Day by parachuting into France where he did back in 1944. IN-29WE pic.twitter.com/8iUiIYRjNp

97-year-old U.S. World War II paratrooper veteran Tom Rice, who served with the 101st Airbone, takes part in a commemorative parachute jump over Carentan on the Normandy coast ahead of the 75th anniversary of D-Day: https://t.co/ZvCyIxSG1j 📷 @rossignolreuter pic.twitter.com/9lk8dBiAer

U.S. 101st Airborne paratrooper veteran Tom Rice, 97, participates in a tandem parachute jump near the Normandy coast ahead of the 75th anniversary of the historic D-Day invasion.

"I feel great," he said afterward. "I'd go up and do it all again." https://t.co/3KKlYNftTR pic.twitter.com/xYwnVSCNYu

Yay, freedom from Nazis and morons like you who have nary a clue of history and the sacrifices many heroes made that you should be free. Freedom isn't free! Someone had to pay for it, many with their lives.